Xiaomi has made a name for itself in recent years for launching a series of phones, TVs, and other devices featuring decent specs, low prices, and premium design touches.

For the most part Xiaomi’s phones, tablets, and TV boxes have been built using processors made by other companies. But Xiaomi is getting ready to unveil new mobile chips designed by a subsidiary of the company.

Code-named Pinecone, we first heard about the new chips earlier this month. Now Xiaomi is has confirmed that it’ll unveil the first Pinecone chip or chips at an event in Beijing on February 28th. 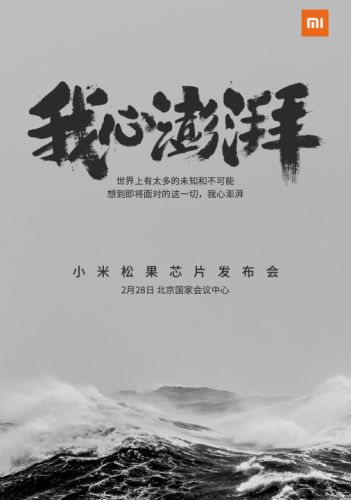 That means Xiaomi will make the announcement during the same week that the Mobile World Congress trade show in taking place in Spain, but the Chinese company will unveil its Pinecone chips on its home turf.

While Xiaomi hasn’t revealed any other details about the Pinecone chips yet, they are rumors of at least two versions in the works:

There’s no word on what kind of graphics we can expect, or how the new chips will stack up against processors from Qualcomm, Samsung, Huawei or MediaTek in terms of real-world performance.

But by taking control of the chip design, Xiaomi may be able to tweak its smartphone hardware and software to best take advantage of custom features built into the chips… or reduce costs of its products by leveraging economies of scale.

It’s not clear if Xiaomi has any plans to sell Pinecone chips to other device makers, but it does seem likely that we’ll start to see the chips used in Xiaomi-branded devices in the not-too-distant future.

via MIUI Forum, Weibo, and Engadget