The Ouya is a $99 video game console with an NVIDIA Tegra 3 quad-core processor, 1GB of RAM, 8GB of storage, WiFi, Bluetooth, and USB ports. It runs Google Android 4.0, comes with a wireless game controller, and it’s designed as a low cost platform for playing Android games on a big screen TV.

But it can also run apps that aren’t games. And that means that you could use the $99 set-top-box for a variety of purposes. One of the most obvious? A media center PC. It turns out there’s an app for that. 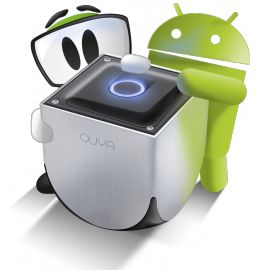 XBMC is a media center app for Windows, Mac, and Linux computers. The developers are working on an Android version, and now they’ve announced that they’re working with the Ouya team to make sure that it runs on the $99 box.

This isn’t exactly a first… XBMC started out as Xbox Media Center, a project for transforming the original Microsoft Xbox video game console into a media center before the project branched out to support other hardware.

XBMC provides a full-screen interface for navigating music, movies, pictures, and other media using a TV and remote control. It also supports dozens of plugins that let you stream media from websites including Hulu, Amazon, Grooveshark, and NPR. 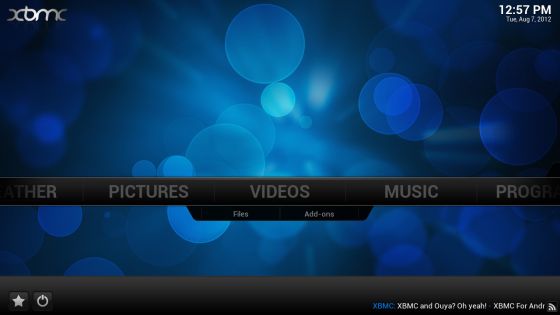 While the Ouya console only has 8GB of storage, it would make a pretty great media center if you plug in a USB hard drive for extra storage or stream media from a shared network drive. You could also use it to do nothing but stream media from online audio and video sites, and it’d be sort of like a more versatile Roku box.

The only catch is that neither the Ouya console nor the XBMC app for Android are available yet. Ouya is still in the fundraising stages, and plans to start shipping developer units to donors in December and finished products to customers in March, 2013. Pre-orders through Kickstarter end on August 8th, 2012.

The XBMC app is still under development. The developers have released the source code, but if you want to try out XBMC for Android on an existing phone, tablet, or mini PC, you can download a pre-compiled (but beta) build from the Miniand forums (among other places).