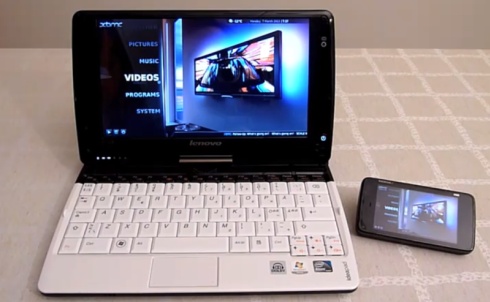 The popular XBMC media player application may have started its life as Xbox Media Center, running on the original Xbox game console with an Intel Pentium II chip. But today XBMC can run on a wide range of systems, with builds to run as an app on Windows, Mac, or Linux computers or on the Apple TV.  So it should come as no surprise that you can run the application on devices running MeeGo Linux.

What is a little surprising is to see XBMC running not only on a Lenovo IdeaPad S10-3t notebook with an Intel Atom processor, but also on a Nokia N900 with an ARM-based TI OMAP 3430 600 MHz processor. But the folks at Cybercom have posted a video showing the media player running on both of those devices.

On the netbook, XBMC is running as an app on top of MeeGo Linux 1.2. The Nokia N900 is running a stripped down version of MeeGo without the usual MeeGo user interface. Instead it shows the XBMC home screen at launch.

You have restart XBMC in order to use the keyboard on the N900, but video playback looks great, and while the menu transitions aren’t as smooth as on the higher powered Lenovo netbook, most of XBMC’s basic features appear to work.

You can see MeeGo in action on both devices after the break.