After months of testing, the developers of the popular XBMC media center software have released the first official easy-to-install version of XBMC for Android. It’s based on XBMC 12 “Frodo” Beta 2, and it shares most features with the latest builds of the media center software for Windows, OS X, Linux, iOS and Apple TV boxes. 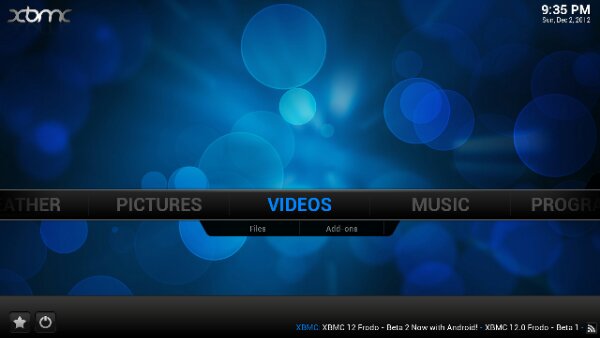 XBMC is a powerful media center application that can handle audio and video playback, display photos, and stream media from the internet thanks to dozens of third-party plugins. Originally developed as a way to turn the first Xbox into a home media center device, XBMC still has a user interface designed to look good on a big screen TV. There are also skins available that give the software more of a touch-friendly appearance for phones or tablets.

While the XBMC team started making source code for an Android version available this summer, you either had to compile the software yourself or download an unofficial build compiled by someone else if you wanted to run XBMC on an Android phone or tablet.

Now you can download Frodo beta 2 directly from the XBMC servers and give it a try in your Android device.

At this point, the team is only officially supporting devices with chips that feature NEON. That includes a wide range of devices including most recent high-end smartphone as well as inexpensive TV sticks and Mini PCs with Amlogic AM8726, Allwinner A10, and Rockchip RK3066 processors.

You can find a list of supported devices at the XBMC wiki. Or you can try installing the app to see what happens. If your device isn’t supported, you’ll find out when the app… doesn’t load. Yeah, I know. It’s kind of a bummer.

While there are already plenty of decent audio and video players for Android phones and tablets, XBMC will be particularly useful for folks looking to pick up a cheap Android set-top-box to pair with a TV. The upcoming Ouya video game console is expected to support XBMC, and at this rate it looks like you’ll be able to install it on the MK802, UG802, or any number of other Android mini-PCs. That makes those devices a pretty interesting alternative to boxes designed to run Google TV software.