The Windows Subsystem for Android lets you run Android apps on Windows 11. Available as a preview for Windows Insiders on the beta or dev channels, installing WSA will also install the Amazon Appstore, which currently allows you to install about 50 Android apps.

But shortly after Microsoft released the first preview builds of WSA, folks figured out that you could sideload Android apps. Initially that meant installing and running some command line tools. Now there are easier ways thanks to several free third-party tools. In this article, we’re going to look at WSATools, a free app that’s available from the Microsoft Store. 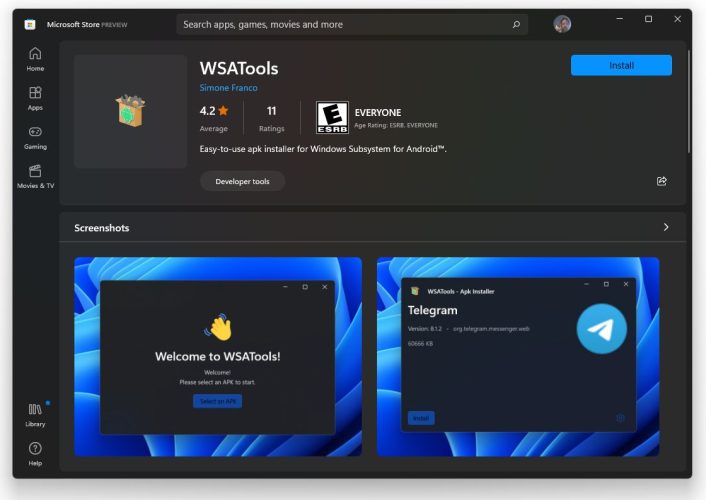 Created by developer Simone Franco, WSATools basically takes care of most of the heavy lifting when it comes to installing Android apps downloaded from the internet. You shouldn’t need to install the Android Debug Bridge or any other software and you shouldn’t have to open a command line utility to install Android apps.

But you will need to do 3 things before you can use WSATools:

Once that’s done, all you need to do is install WSATools from the Microsoft Store, download the Android APK you want to install from a source like APKMirror or APKPure, and then either:

Franco notes that WSATools 1.5.0, which is the version submitted to the Microsoft Store on November 5, 2021 is still a work in progress that may have some bugs to work out. For example, some users have reported that the app crashes or fails to complete the installation.

But Franco is troubleshooting those issues and says to expect updates.

It’s also worth noting that any Android apps that require the Google Services Framework will not run properly, even though you may be able to sideload them. That’s because the Windows Subsystem for Android does not include Google’s apps, services, or the Google Play Store (at least not out of the box).

Franco says WSATools will also eventually be open sourced and the code will be available at GitHub, but there’s no word on when that will happen.

In the meantime, if WSATools doesn’t work for you, then you can always try sideloading apps using the command line. Or if you’re a bit more adventurous, you might want to try installing the Google Play Store and other Google apps and services, which certainly makes installing Android apps easier… even if the installation process for Google Play itself isn’t all that simple.

WSATools 0.1.50! The first version is now, finally available! 🥳 There’s a bunch of things that can be improved, so please keep reading this thread, but meanwhile…

I can’t wait to hear your feedback on my app! (thread) pic.twitter.com/2LonhLD4SG