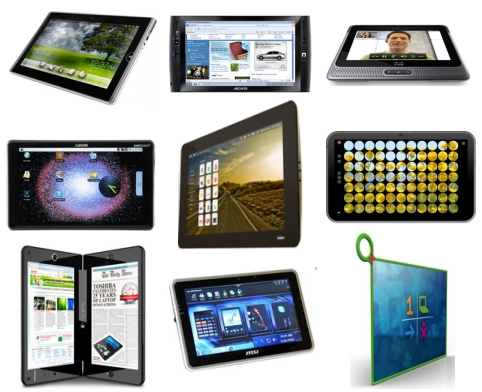 We’ve been hearing a lot about Android, Windows, Linux, and WebOS tablets over the last few months as everybody and their kid brother prepares to take on the Apple iPad. But it’s hard to keep them all straight, with some models like the Archos 9, Camangi WebStation, and Augen GenTouch78 already available and others such as the HP PalmPad and RIM BlackPad still in the rumor-and-speculation stage.

Fortunately Technologizer has taken the time to tally up 32 tablets. Some are most definitely real, while others are possibly just figments of our collective imagination.

But here’s what they all have in common at this point. They’re small (5 to 10 inch) tablet-style devices with touchscreen displays and no physical keyboards. And they’re not built by Apple.

Which tablets are you looking forward to most?

Update: As my colleague Chippy points out, you can also find an enormous list of existing and upcoming tablets at UMPC Portal.

7 replies on “Wondering where the tablets are at? Here’s 32 of them”