Devices that let you run Android apps and games on your TV are a dime a dozen (or as cheap as $30 anyway). But the Wizarm might be the most powerful, feature-packed model to date.

It’s a set-top box with a dual-core ARM Cortex-A15 processor, 16GB of storage, 2GB of RAM, a large number of input and output options, and the ability to act as a digital video recorder. That means not only can you use it to bring content to your TV, you can also save live video for later viewing.

There’s a bit of a catch though. First, the Wizarm isn’t actually on the market yet. The developers are running an Indiegogo campaign to raise $200,000 to turn the concept into a real product. Second, it’s not exactly cheap. Early backers can snag one for $259, but once all the early bird specials are gone, the price will go up to $299. 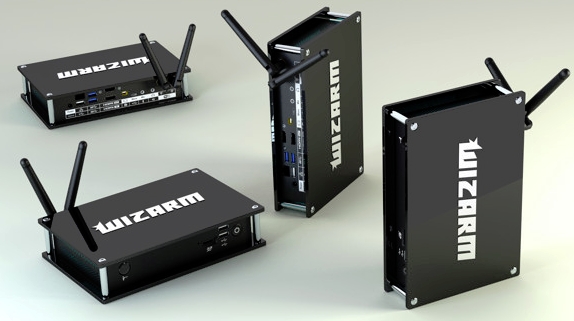 The Wizarm features a Samsung Exynos 5 dual-core processor, a SATA 3 port for a 2.5 inch hard drive or solid state disk, 2 USB 3.0 ports, 4 USB 2.0 ports, mic input and headphone output, HDMI input and output, a Display Port, and optical sound output. It also features Gigabit Ethernet, 802.11a/b/g/n WiFi, and Bluetooth 4.0, and there’s an IR port for use with a remote control.

The box runs Android 4.2 Jelly Bean with some custom goodies tacked on. There are plans to port Ubuntu to the device as well, and the developers say it’ll be a hackable device that comes pre-rooted.

Users will be able to control the box with a keyboard and mouse, game controller, or mobile app.

While the specs alone are enough to help set this box apart from the crowd, the ability to act as a high-definition digital video recorder is probably its most unusual characteristic. You can use the HDMI input to record videos at 1080p resolutions.

You can use that feature to record video games, live television broadcasts, or other video. Unfortunately I don’t see any indication that the box will offer a full-fledged TiVo-like user interface for scheduling future recordings, so I’m not sure you could use it as a full replacement for the DVR from your cable company, a TiVo, or a home-theater PC running Windows Media Center, Media Portal, or another full-fledged DVR app.