Withings offers a line of connected health and fitness products including the Withings Pulse O2 activity tracker, a line of wireless scales, a blood pressure monitor, and a sleep monitor.

The company’s next product is a designer watch… that also happens to be an activity tracker.

The Withings Activité is a Swiss watch that monitors your physical activity and syncs your data with your phone. Unlike most fitness trackers, it has analog dials and gets up to a year of battery life thanks to a standard watch battery. 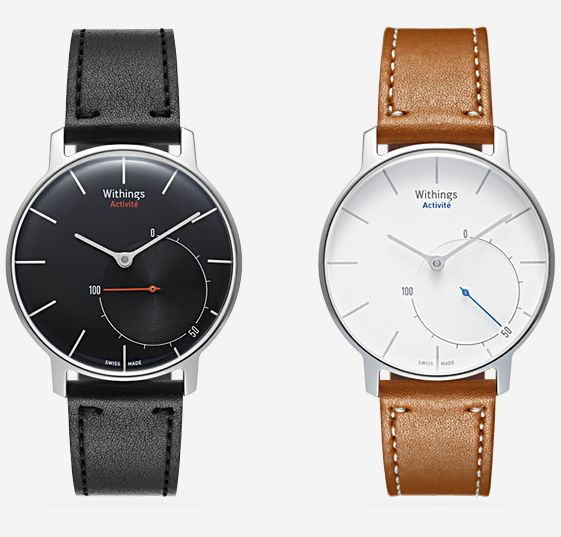 Withings designed the watch in France, and it’s made in Switzerland. At a glance, it looks like a designer watch, not a fitness tracker. There’s a leather band, a round face, and analog minute and hour hands.

There’s also a smaller circle that goes from 0 to 100 to show how far you have to go to meet your personal fitness goals for the day. It does have a few tricks that a normal watch might not including a vibrating alarm. And of course, it can sync with your iOS phone over a Bluetooth Low Energy connection (Withings has an Android app too, but it looks like the Activité may be iOS-only at launch).

The watch is water resistant and you can use it to track swimming progress as well as steps. It also monitors sleep activity and automatically detects when it should change modes for sports, sleep, or normal activity.

Withings plans to launch the Activité this fall… but it won’t come cheap. The watch will sell for $390, making it one of the most expensive fitness trackers around… but also one of the most stylish.

I’ve been clipping a Withings Pulse to my belt for the past 6 months to help me keep in shape. While the company’s Android app needs a bit of work, it’s been a nice little device for reminding me that it might be time to get a little more exercise. But when I tried strapping it to my wrist instead of my belt, I noticed that it stopped counting steps while I walked at my treadmill desk… since my arms don’t move as much as my legs while I’m typing and walking.

So a wrist-worn fitness tracker might not work for everyone… although I suspect most people aren’t using treadmill desks (I work from home and wouldn’t get as much exercise without one).