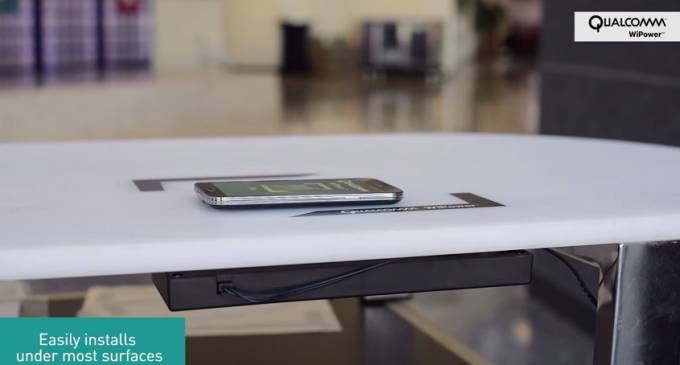 Qualcomm says its WiPower system is compatible with the Alliance for Wireless Power’s Rezence charging standard… which means that you’ll need a Rezence charging pad in order to charge a phone with Qualcomm’s new technology. Qi chargers won’t work.

That said, the solution should make it possible to throw your phone on a table, desk, or other Rezence charging surface to refill or top off the battery.

Wireless charging still isn’t all that common, but it’s been picking up steam in the past few years. Existing solutions aren’t quite as efficient as simply plugging a cable into your device: you lose a little bit of energy when charging without wires. But wireless chargers can be a lot more convenient: you don’t have to fumble with cables, risk scratching your phone when attempting to plug it in in the dark, and basically it makes charging your phone when it’s not in use a no-brainer.

The Rezence standard has a few nifty things going for it, including the ability to charge through other surfaces, allowing you to put a charger underneath a tabletop, for example. You can also charge multiple devices at once and Rezence chargers can currently provide up to 22 watts of power.