Windows 8 tablets may be all the rage these days, but that doesn’t mean there’s not still room for Windows 7 tablets in some niche markets. Rugged device maker Winmate’s latest tablet is a 7 inch tablet with an Intel Atom N2600 processor and Windows 7 operating system.

Introduced earlier this year, the Winmate M700D showed up this week at the FCC website, suggesting it could hit the market soon. 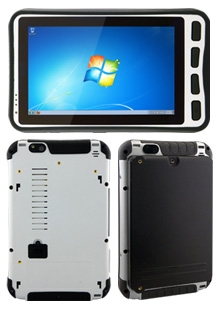 The Winmate M700D features a 7 inch, 1024 x 600 pixel display with a capacitive multitouch panel, 2GB of RAM, and a 32GB solid state disk (although models with up to 4GB of RAM and 128GB of storage are available).

It has 802.11b/g/n WiFi, Bluetooth 2.1, and optional 3G and GPS capabilities. The tablet also features a USB 2.0 port, microSD card slot, and headset jack. The M700D comes with an 16.8Whr battery, but there’s an optional 38.5Whr battery which can provide up to 8 hours of run time.

The tablet measures 8.4″ x 5.2″ and weighs about 1.8 pounds. That might seem a bit heavy for a 7 inch tablet, but it’s actually pretty light for a rugged device that meets the MIL-STD-810F standard.

In other words, the Winmate M700D is meant for use in harsher conditions than your typical consumer tablet such as outdoor environments, factory floors, or other places where it’s likely to take a beating. While it doesn’t have a Pixel Qi-style screen for outdoor visibility, the LED screen brightness can be cranked up to 500nits which should make it viewable outdoors.

Winmate likely won’t be selling this tablet through retail channels. You’ll need to contact Winmate for pricing information, but don’t expect this sort of device to come cheap.