The Windows Subsystem for Linux is tool that lets you install a Linux distribution on a Windows 10 or Windows 11 computer, allowing you to run some Linux tools without rebooting or firing up a traditional virtual machine.

It’s been around in one form or another since 2016, but the current version, known as WSL 2, debuted in 2019 and has been considered a “preview” ever since. Now it’s graduating to stable status with the release of WSL 2 version 1.0.0 and Microsoft says the Windows Subsystem for Linux is now generally available for Windows 10 and 11. 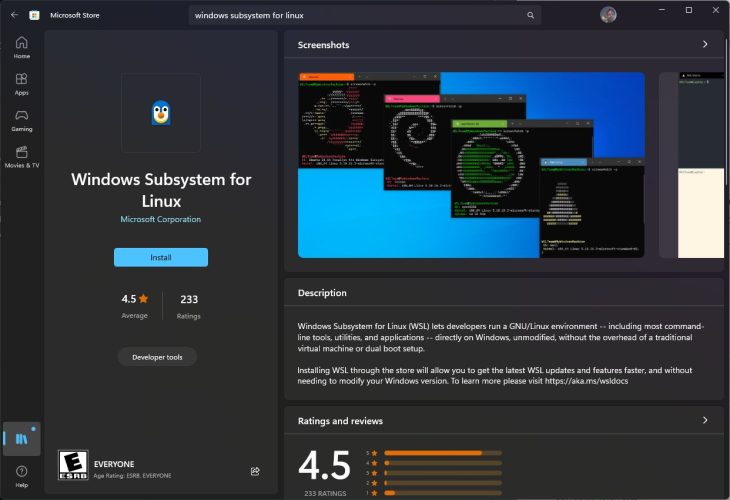 That means it’s generally available to the public. I mean, it already was, but now it’s considered stable enough that you won’t see a preview warning anymore.

Among other things, Microsoft says the update means that the version of WSL available from the Microsoft Store includes the default experience, complete with WSLg (Windows Subsystem for Linux GUI). That means that you don’t have to install anything extra to run apps with a graphical user interface anymore. Previously the default install of WSL only supported command-line utilities.

It also means that while you can still install WSL from a command line prompt, what you’ll get is the same version that’s available from the Microsoft Store.

Other changes in WSL 1.0 include optional support for systemd, some new options for the wsl –install, wsl –mount, wsl –import, and wsl –update commands, better error printing, and a new wsl –version command that will let you quickly see at a glance which version of the Windows System for LInux is installed.

Keep in mind that WSL is just one piece of the puzzle. Once enabled, you’ll still need to actually install a Linux distribution in order to run Linux apps. But there are a bunch of options available, including Ubuntu, Debian, Kali, and OpenSUSE.

You can find more details in Microsoft’s announcement or the company’s WSL documentation.