The Windows Subsystem for Android is an optional feature that lets you run some Android apps on Windows 11 PCs. First launched a year ago as preview feature for Windows Insiders, Android app support eventually made its way to stable builds of Windows – but it was still considered a “preview,” which is another way of saying beta. 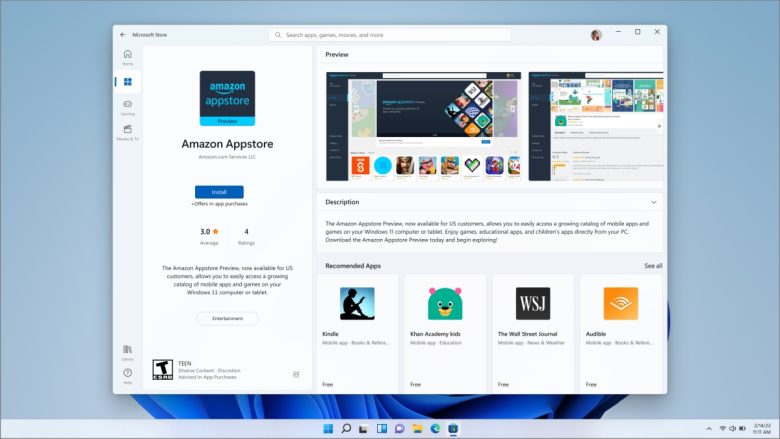 Once enabled, WSA allows you to install and run Android apps as if they were native Windows applications: icons will appear in the Start Menu, Taskbar, and other locations, and apps launch in windows that can be resized or moved.

But that doesn’t mean that all Android apps will run. WSA doesn’t officially support the Google Play Store or other Google services. Instead Microsoft partnered with Amazon. So the easiest way to enable WSA is to install the Amazon Appstore from the Microsoft Store.

Once you’ve done that, you’ll be able to install over 50,000 supported apps and games from the Amazon Appstore. But that’s drop in the bucket compared with the millions of apps in the Google Play Store.

Despite the fact that WSA has graduated to version 1.0, there are still some Android features that don’t work at all on Windows 11: there’s no support for widgets or picture-in picture video. Apps that require hardware DRM don’t work. You also can’t use USB or Bluetooth accessories with Android apps on Windows 11 PCs yet. And Microsoft hasn’t enabled support for file transfer of file backup or restore yet.

But the company says it’s working on at least a few of those things: file transfers and picture in picture support are on the product roadmap, as is an upgrade of WSA to Android 13. Microsoft also just pushed a new build of WSA to Windows Insiders featuring improvements for camera, clipboard, graphics, and multi-threaded performance, among other things. Just because there’s a “stable” build doesn’t mean Microsoft isn’t still offering preview builds to beta and dev channel testers.

Of course, some folks have been finding ways to install Google Play or sideload apps that aren’t available in the Amazon Appstore. So that’s always an option if you don’t mind running software that’s not officially supported. And some of those tools already let you do some of the things that Microsoft doesn’t support yet (like backing up your apps and data).