It’s starting to look like there’s no operating system that won’t run on the HTC HD2 smartphone. When the phone launched in 2009 it shipped with Windows Mobile 6.5, and many customers were disappointed when Microsoft released Windows Phone 7 later that year and the HD2 didn’t get an upgrade.

But since then we’ve seen Windows Phone 7, WP8, Google Android, Ubuntu, MeeGo, and other software ported to run on the phone… unofficially. 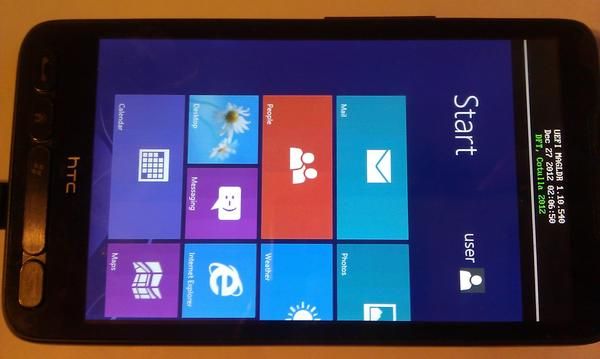 This is a very unofficial project. Windows RT is basically a stripped down version of Windows 8 designed to run on devices with ARM-based processors… but Microsoft doesn’t sell it as a user-installable operating system. Instead, the only official way to get Windows RT is to buy a tablet or other device that comes with it preloaded.

That makes CotullaCode’s work all the more impressive — but it’s not something I expect many people to do.  While Windows RT is designed for touchscreen devices, it’s really meant for devices with tablet-sized screens, not phones. It’s also designed for devices with significantly more RAM than the HD2’s 512MB and faster processors than the 1 GHz Qualcomm Snapdragon chip in the phone.

Still, it’s nice to see that this phone-that-won’t-die still has a few surprises up its sleeve.

5 replies on “Windows RT ported to the HTC HD2”