Microsoft is rolling out Update 3 for Windows RT, and as promised, it brings a Start Menu to the version of Windows designed for tablets with ARM-based processors.

The update doesn’t seem to bring many other features, but it does make Windows RT look a little more like Windows 10… even if it doesn’t get all the new features from Windows 10. 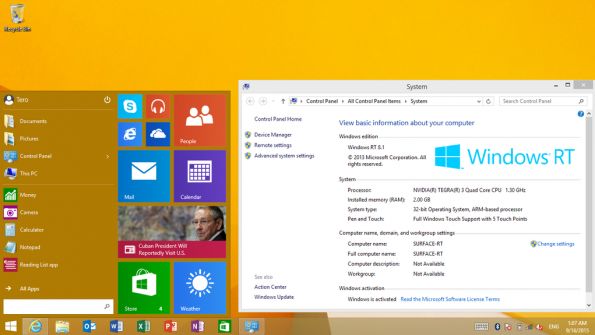 For instance, there’s no support for the Cortana voice assistant, no Microsoft Edge web browser, and perhaps most importantly, no support for Universal Windows Apps. In other words, users continue to be limited to running Windows Store apps that were developed for Windows RT.

There aren’t a ton of Windows RT devices on the market, but if you happen to have a Surface RT, Surface 2, Asus VivoTab RT, or Nokia Lumia 2520, the update… won’t really do much.

While the Windows 10 Start Menu comes in handy for folks that don’t want to use a full-screen, touch-friendly app launcher for full-screen, touch friendly apps, for the most part those are the only type of apps you can run on Windows RT. While the operating system has a taskbar and desktop, it’s only really useful for running Microsoft Office, Windows Explorer, and a few other system apps.

According to WinSuperSite and Tero Alhonen Windows RT Update 3 has begun rolling out through the Windows Update service. There’s a pretty good chance this will be the last major update for tablets running Windows RT.