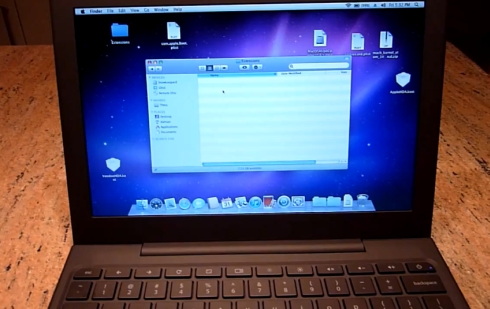 It was bound to happen: some of the folks who snagged Google’s developer notebook for Chrome OS have figured out how to install alternate operating systems including Windows and OS X.

YouTube user Damis648 has installed OS X and he reports that while the OS is a bit sluggish most of the hardware is supported out of the box including the multitouch trackpad. You can check out his video after the break.

Meanwhile, a member of the Something Awful Forums has posted details about running both Windows and OS X on the laptop. On Windows the 3G modem doesn’t work properly, and you’ll have just about 2GB of disk space after installing the OS.

The biggest problem is that the Cr-48 laptop has an Intel Atom processor and GMA 3150 graphics — which don’t play that well with Adobe Flash or OS X in general — especially on a device with a high resolution display.

Overall, you’re still probably best off running Chrome OS on the Cr-48, because that’s what it was designed to run — and because if you got one of the early units it’s because Google expects you to test Chrome OS on the device. But it’s nice to know that it’s possible to dual boot or replace the operating system if that’s the sort of thing you’re into.