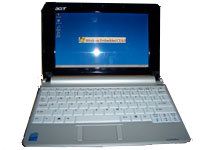 Part of what makes a netbook exciting is the fact that it runs a full fledged operating system like Linux or Windows XP. Unlike clamshell PDAs and “handheld PCs” of the past that ran EPOC, or Windows CE, you can run virtually every modern application on a computer like the Acer Aspire One.

But what if you don’t need to run every modern application? What if all you need is a web browser and a word processor, and maybe a chat application. And what if you value instant on/off capabilities and an OS that takes up just a few megabytes of storage space?

Quarta Mobile is working on a project that will allow manufacturers or end users to install Windows Embedded CE 6.0 on existing and upcoming netbooks. First up, Quarta is developing drivers for the Acer Aspire One and Lenovo IdeaPad S9. But other netbooks could follow.

Windows CE has a few advantages over Windows XP. First, it’s cheaper to license. And second, it includes that instant on/off feature I mentioned. And it has a few advantages over Linux as well, in that Windows CE has a look and feel that should be at least vaguely familiar to desktop Windows users. There are also thousands of free and commercial applications that run on Windows CE including a version of the Opera web browser.

On the other hand, Windows CE isn’t really designed to be a desktop operating system. It runs on PDAs, smartphones, and devices with dedicated functions, like ATMs. It’s not as flexible or powerful as Windows XP or Linux. But Quarta does plan to release an SDK for developers who want to create custom applications for the platform. Perhaps if we start to see native versions of applications like Firefox or Google Chrome, and maybe even OpenOffice.org Windows CE might really be a viable laptop operating system.

No word on how much Quarta’s software will cost manufacturers or end users, or when it will be available.

11 replies on “Windows CE coming to the Acer Aspire One, Lenovo S9”