Microsoft is expected to release a preview of the next version of Windows this fall and it will likely be followed by a full release of Windows 9 in early 2015. Right now the software’s code-named Windows “Threshold,” and details about the software have been leaking left and right.

It’s not clear how accurate all of the reports have been, but if they’re true Microsoft could be making some big changes to its operating systems as well as how it rolls out updates.

Here are some of the latest reports regarding Windows Threshold. 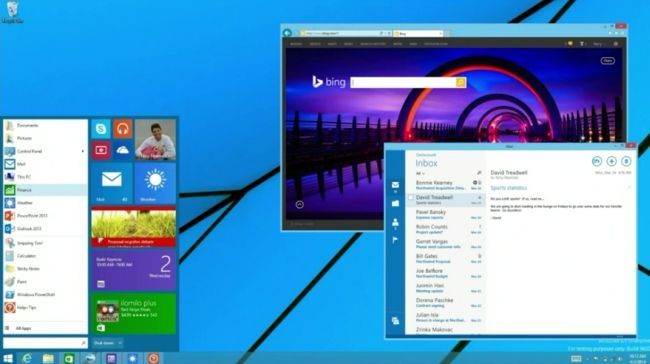 Don’t think the Start Screen and the full-screen user interface once known as “Metro” make sense on devices that don’t have touchscreens? Microsoft has you covered.

We’ve already heard that the company could be bringing back a sort of Start Menu that you can access from the desktop environment and killing the Charms menu that appears on the side of the screen when you swipe from the edge or move your mouse to the corner.

While Microsoft could be getting ready to remove the tablet-friendly view from non-tablets, the company may be doing the exact opposite for devices that are tablets by removing access to the desktop from Windows RT.

Devices including the Microsoft Surface 2 and Nokia Lumia 2520 that currently ship with Windows RT include access to what looks like a normal Windows 8.1 desktop environment… but the only things you can really do in desktop mode are run Office 2013 RT and access Windows Explorer and a few other basic functions.

The next version of Windows RT is due out in early 2015 and by then Microsoft’s touch-friendly version of Office should be available for the platform, so the company is expected to remove the desktop entirely. This’ll make Windows RT tablets look and feel a lot more like Android or iOS devices and less like Windows notebooks which can’t run most Windows apps.

Arguably it could have done this a few years ago by releasing a tablet-friendly version of Windows Phone instead of a version of its desktop operating system optimized to run on devices with ARM-based chips. But Microsoft has been making moves in recent years to bring all of its operating systems closer together.

For example the company recently introduced a new type of app it calls Universal Windows Apps which will be able to run not only on desktops, tablets, and phones, but also Xbox One game consoles.

Another thing that shows all versions of Windows are coming closer together is the inclusion of a new notification center in Windows Threshold, which will let you view updates on a tablet much the same way you can on a smartphone.

While a Windows Threshold preview will be available in September or October, reports suggest that a preview of the next version of Windows RT isn’t due until January or February.

The final versions of both Windows Threshold (which will probably be called Windows 9) and Windows RT Threshold are expected to launch in 2015, possibly in the springtime.

That would mean that Microsoft’s next major version of Windows would hit the streets less than 2 years after the launch of Windows 8.1. Rapid updates of that sort could annoy enterprise users… but the removable of the Start Screen could attract plenty of those enterprise users who have yet to upgrade from Windows 7 or Windows 8.

Some reports suggest that Windows 9 could also be a free or cheap (around $20) update for users of Windows 8.1

According to ZDNet’s Mary Jo Foley, after Windows 9 launches Microsoft will change the way updates are rolled out. Instead of offering a major new version of Windows every few years, the company could offer smaller free (or subscription-based) updates on an ongoing basis at regular intervals.

So it might be a long time before we see Windows 10… if we ever see it at all. Instead new features will arrive periodically along with security and stability updates.

Take all of this with a grain of salt: Microsoft hasn’t actually said much about Windows 9 or the next version of Windows RT yet. We do know that some sort of Start Menu which incorporates Start Screen features is on the way and we do know that Microsoft is bringing Windows, Windows RT, and Windows Phone closer together.

But some of the recent reports I’ve seen are contradictory… or at least incomplete. At the very least, it doesn’t make sense for Microsoft to totally remove the Start Screen and touch-friendly Metro-style user interface from 2-in-1 devices like its Surface tablets, Lenovo Yoga-style tablets, or any number of notebook/tablet hybrids from Acer, Asus, HP, Toshiba and others.

It does seem likely though, that Microsoft is hoping to make the tablet-friendly versions of its software work better on tablets, while it tries to placate users who feel that Windows 8 and 8.1 have been downgrades for desktop and notebook users.

11 replies on “Windows 9 “Threshold”: Microsoft removing the Start Screen from Enterprise and the desktop from Windows RT?”