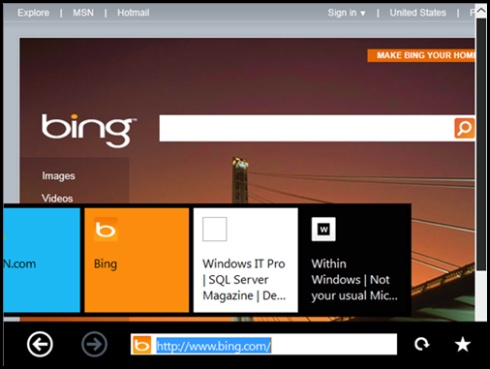 With early builds of Windows  already in the hands of some testers, it was just a matter of time before we started to see leaked images of the new operating system. The folks at Within Windows have posted some of the first pictures of a new user interface designed for tablets, phones, and other small touch-based computers. Microsoft isn’t replacing the Aero desktop interface entirely, but rather including an alternate user interface that will allow Windows 8 to be used on different types of devices.

Like Windows Phone 7, the new user interface is based on “tiles.” For instance, when you load the Windows 8 version of Internet Explorer 9, the browser tabs show up as little squares in a tray. The URL bar and back, forward, bookmark, and refresh buttons also have a Windows Phone 7-like look.

There’s also a new PDF viewer which is designed to run in full screen mode and supports zooming navigation.