Up until recently, the more pixels you packed into a screen, the smaller apps, text, and graphics would look. So an 11.6 inch, 1920 x 1080 pixel display is a mixed blessing. On the one hand, movies and pictures look great. On the other hand, text is virtually unreadable because it’s so tiny.

Windows 8 uses a new Metro-style user interface with an emphasis on apps that run in full screen mode. Like Android and iOS apps, these apps should look the same now matter how densely packed the pixels are on your screen. They’ll just look more clear and less pixelated on screens with high pixel density. But on screens that are physically larger, these apps may be able to show additional content.

With that in mind, Washington presents a list of common sizes for Windows 8 computers, including:

While a 27 inch screen may have the same resolution as a 10.1 inch display, it will be able to display more content. 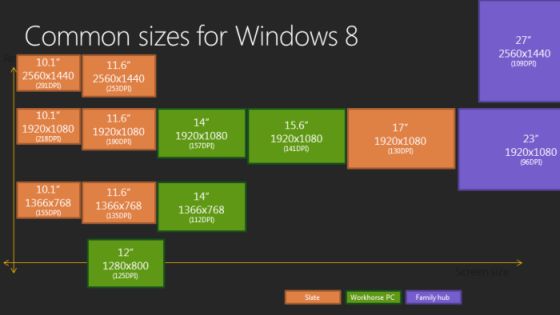 None of this guarantees that device makers will produce those 10 inch tablets or netbooks with high resolution displays, but if they do Microsoft will be ready for them.

But there are a few down sides.

The first is that Windows 8 won’t support Metro-style apps on devices with screen resolutions lower than 1024 x 768 pixels. Microsoft says that only a tiny portion of computers fall into that category, but most netbooks to hit the market so far have had 1024 x 600 pixel or lower resolution screens. The only way to get the Metro UI working on these devices it to apply hacks.

Washington implies that future netbooks will have higher resolution displays, but while that might be true for netbooks that launch after Windows 8 is released later this year, it’s not good news for anyone hoping to upgrade an existing mini-laptop to the next version of Windows.

The other thing I found a bit troubling about Washington’s post is that it focused almost exclusively on Metro style apps. It’s great to hear that next-generation Windows apps will scale to different screen sizes, but part of the appeal of Windows is that there are thousands, if not millions of older apps that aren’t Metro apps. Windows 8 includes a traditional desktop and taskbar style view, but it doesn’t look like apps designed for that view will support scaling any better than they do in Windows 7.

Washington says that most users run apps in full screen mode most of the time anyway… but I’m pretty sure that a large number of power users clamoring for high resolution displays want them specifically so they can run more apps side-by-side in separate windows.

While I’m excited about the prospect of new Windows devices with high resolution displays, if most older Windows apps look awful on those devices then there’s really not much advantage to choosing a Windows 8 device over an iPad or Android device.

16 replies on “Windows 8 to support higher resolution displays… but will apps?”