Microsoft has spent a lot of time over the last few months showing off the new Metro user interface for Windows 8. This is a full screen UI designed for apps that are “chromeless,” meaning there are no title bars, borders, or other items surrounding them. They take up the full screen and look great on tablets, all-in-one PCs, and other touchscreen devices.

But now Microsoft has announced that the standard desktop user interface will also be overhauled for Windows 8. Microsoft is basically killing the Aero interface launched with Windows Vista and offering a simpler look and feel which takes up less screen real estate and uses fewer system resources. 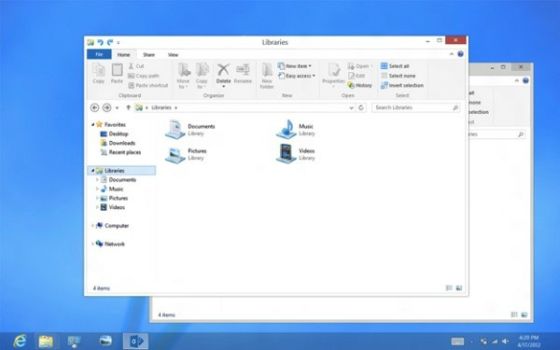 The upcoming Windows 8 Release Preview won’t necessarily have all of the changes… but by the time Windows 8 launches to the public later this year Aero will be gone.

Microsoft is eliminating the glass effects, shadows, and reflections from toolbars and borders. Buttons don’t glow anymore. And the taskbar and windows now have squared edges rather than round.

On the one hand, the new look is more in keeping with the Metro style user interface. But at the same time, this feels a bit like a step back in time. The last version of Microsoft’s flagship operating system that used square edges by default was Windows 2000.

24 replies on “Windows 8: Moving beyond Aero”