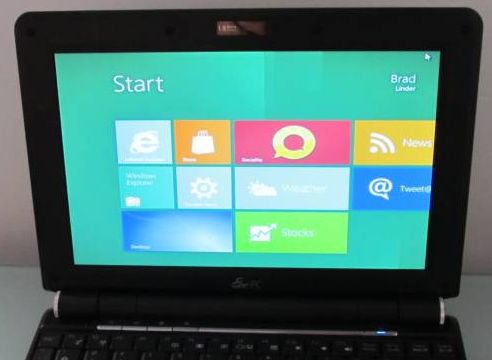 Last night Microsoft made the first developer preview version of Windows 8 available for download from dev.windows.com. As of this morning, CEO Steve Ballmer says the operating system has been downloaded more than 500,000 times.

That certainly shows there’s a lot of interest in Microsoft’s new operating system. This is still an early version that’s been released for testing purposes only. Many features aren’t available yet; there’s no Windows Media Center functionality; and there’s no public support for ARM processors yet. But Windows 8 represents a dramatic change of direction for Microsoft.

The operating system has been designed to run on any device that can support Windows 7, but it also has a new Metro style user interface designed for touchscreen tablet, notebook, and desktop computers. Some elements of the Metro UI show up even if you’re using the classic Windows desktop though. The Start Menu, for instance, has been largely replaced with a start screen. And if you’re using a device with a high resolution display there’s support for full screen apps that don’t show a Windows taskbar or any toolbars until you need them (although if you ask me, that UI is even more important on devices with low resolution displays).

I was one of the half million people to download Windows 8 today, and when I took the OS for a spin on my aging Asus Eee PC 1000H netbook, I was impressed with how well it runs out of the box. But I’m still on the lookout for proper VGA drivers, since Windows 8 insists that my 1024 x 600 pixel display is an 800 x 600 pixel screen.

But just because 500,000 people downloaded the developer preview in less than a day doesn’t mean that Windows 8 will be a runaway hit… at least not right away.

First of all, the full version of the operating system may not be available until a year from now, and at that point, Apple, Google, and other software developers will likely have made major improvements to their operating systems.

Second, while Windows 8 does have a traditional desktop view, there are enough changes that the new operating system could alienate longtime Windows users. For instance the Ribbon UI that we first saw in Office 2007 is now used throughout the operating system — even in Windows Explorer. I know plenty of people that still hate the feature in Office, and who probably won’t be all that keen on using it in Windows Explorer.

Third, Microsoft announced this week that Windows 7 has been installed over 450 million times… and that there are finally more people using Windows 7 than Windows XP. But here’s the thing. Windows 7 was released almost two years ago, and it’s not until Windows 8 is on the horizon that Microsoft finally has more Windows 7 users than Windows XP users.

Windows XP had most of the features users expected, supported a wide range of third party aplications, and was stable enough to run for days, weeks, or even months at a time without crashing when treated nicely.

Windows 7 is at least as stable, and certainly offers the features most casual or business computer users need. I suspect Microsoft’s best bet at getting Windows 8 usage to surpass Windows 7 in less than two years is to emphasize its use on devices with new form factors such as tablets… but future Windows tablets will be competing against Apple’s iPad and an army of Android tablets, making Microsoft the underdog in its field for once (well, twice if you count the Zune, I suppose… or thrice if you consider Windows Phone 7).

8 replies on “Windows 8 developer preview: Half a million downloads and counting”