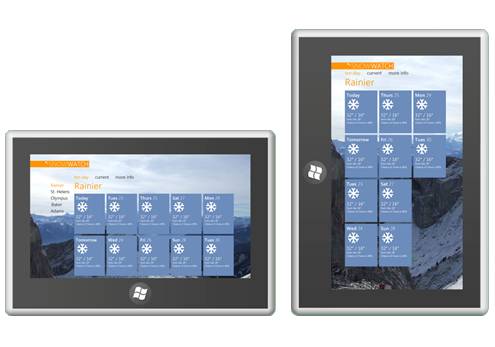 Windows 8‘s new Metro UI provides a new user interface designed for tablets. The start screen features large tiles that are a bit of a cross between iOS-style app icons and Android-style widgets, since they let you launch programs with your finger — but also let you see information such as a brief weather forecast at a glance.

Apps are also designed to run in full-screen mode so that you don’t have to fiddle with tiny toolbars or other classic Windows-style features with your fingers.

Windows 8 won’t officially launch until next year, but the Windows 8 Developer Preview is available for download, and Microsoft has spent a lot of time showing off the early version of the operating system over the last few months. Most of those demos have shown Windows 8 running in landscape orientation on tablet, laptop, and desktop computers.

But Microsoft says Windows 8 and its new Metro UI has also been optimized for portrait orientation.

For one thing, screen rotation has been sped up. If you’ve ever tried to rotate the screen on a Windows 7 tablet — especially one with a slow Intel Atom processor, you know how frustrating it can be to change your grip on a tablet and have to wait a few seconds for the screen to catch up. Hopefully that problem will be a thing of the past with Windows 8.

Windows 8 and apps running on the platform will be able to reflow text and graphics to fit on screens with different sizes. For instance, if you visit a website in Internet Explorer on a device with a 1024 x 768 pixel display the page may be formatted a little differently than if you’re using a 1280 x 800 pixel screen since the text and graphics can be arranged to fit your screen.

The same thing will happen if you rotate the screen so that web pages and apps may display different content (or display the same content differently) depending on whether the screen is positioned in 1024 x 768 pixel mode or 768 x 1024 mode.

The on-screen keyboard is meant to be used in portrait or landscape mode.

Microsoft is also encouraging developers to consider portrait orientation when developing third party apps — so that users will be able to hold a tablet any way they like and still make use of the apps.

While Microsoft is playing up support for portrait orientation, it appears to be a work in progress. Chippy from UMPC Portal recently took Windows 8 for a spin on a tablet and shot a video showing what the operating system looks like in portrait. For now many apps look awful when you turn the tablet sideways.