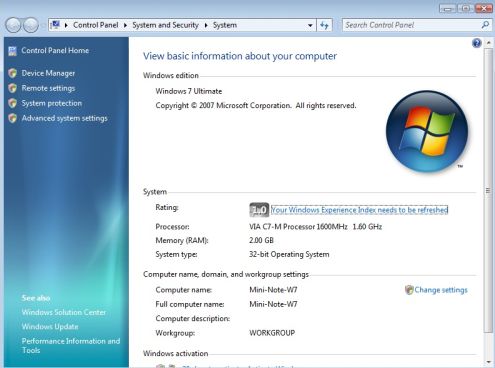 Windows 7 won’t be officially released to consumers until 2009 or 2010, but with early developer builds making the rounds, we’ve seen that the operating system already runs pretty well on low powered computers like the Asus Eee PC 1000H and the MSI Wind. But those are netbooks with the Intel Atom CPU. How does Windows 7 perform on a netbook with a VIA C7-M CPU? The folks at HP Mini Guide loaded up an HP 2133 Mini-Note to find out.

The computer could handle most video playback but dropped some frames while watching a DVD rip and sputtered a bit when watching Hulu video in full screen mode. I sold my Mini-Note a few months ago, but back when I had one, I noted that it also had problems with full screen Hulu videos whether I was running Windows XP or Ubuntu 8.04.