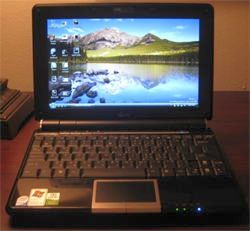 As expected, Windows 7 seems to run fairly well on a netbook. Sure, we’ve already seen the boot screen on an MSI Wind. But Laptop Magazine’s Joanna Stern took a pre-beta build of the next generation Windows operating system and slapped it on an Eee PC 1000H and spent a whole day playing with it. And nothing exploded. So that’s good.

With no programs running, the operating system consumed about 485MB of RAM. I’m looking at my Eee PC 1000H with Windows XP right now, and with no programs running the operating system is using about 286MB of RAM. But the difference might not be as great as you think. If Windows 7 is anything like Windows Vista (and from what I can tell, it is), it will typically report that it’s using more RAM than XP but it will free up RAM for applications that need it more efficiently. Or at least that’s the theory.

So there you go. You can run Windows 7 on a netbook. But that’s not particularly surprising, since you can also run Windows Vista on a netbook. The real question is whether Windows 7 offers an overall better user experience than Windows XP. We’ll probably have to wait a while longer to get a good answer to that question.