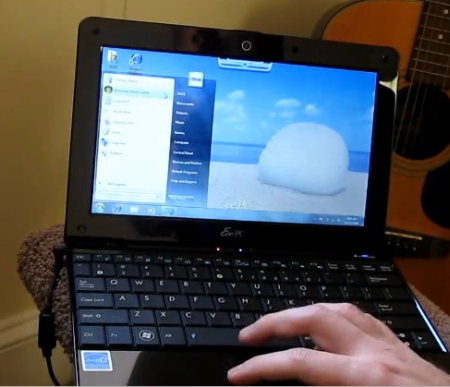 Update: It looks like these results may have been inaccurate, or at least misleading. I’ve run several other tests that seem to indicate that Windows 7 actually hurts battery life on at least two netbook models, including the Eee PC 1008HA.

One nice feature in Windows 7 is that it gives users a bit more control over their power settings. But in some cases, even without tweaking your PC to adjust the CPU clock speed, shut down the hard drive, display, or other tweak other features Windows 7 may still help you squeeze more life out of some batteries — either that, or Asus decided to throw a higher capacity in the Windows 7 version of the Eee PC 1008HA. Either way, Chris Guthrie at Netbook Reviews decided to compare battery performance on a Windows XP version of the Eee PC 1008HA and a new model running Windows 7.

The result? The Windows 7 model ran for more than an hour longer. With the brightness set to full, WiFi and Bluetooth on, and the processor set to run at 1.75GHz, the computer ran for 6:07:30. The Windows XP version ran for just 5:03:18 under the same conditions.

Chris used Battery Eater Pro for his test. I’ve stopped using that particular test, since it taxes the CPU non-stop until the battery dies which doesn’t really provide a good picture of real world usage. In other words, it’s quite likely that you may be able to get another hour or two of battery life out of the new Eee PC 1008HA. I haven’t had time to test the battery on my review unit, but you can be sure I’ll be paying close attention to battery performance in light of Chris’s findings.

Update: I checked in with the folks at Asus, and they assure me that the battery hasn’t changed. So while it is possible that the results are due to the Windows XP model’s battery having run down a bit, Windows 7 may also be playing a significant role. I’ll test the battery on my demo unit this weekend and that should tell us a bit more since the Windows XP model I reviewed a few months back was also a barely used demo unit.