The lines between desktop and mobile devices continues to blur. These days you can run iOS apps on a Mac (but not vice versa). And soon you’ll be able to run Android apps on a Windows PC, no emulator or virtual machine required.

It’s one of many new features coming to Windows 11, which is set to launch later this year. 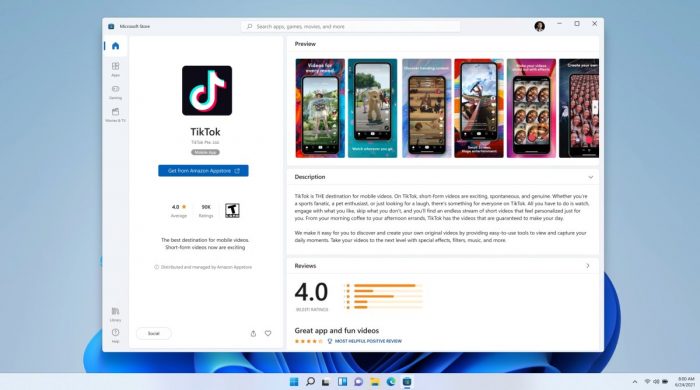 During a Windows 11 announcement, Microsoft’s Panos Panay notes that users will be able to install Android apps that are integrated into the operating system just like native Windows applications.

That means they’ll show up in the Start Menu, you’ll see icons in the taskbar when they’re running, and you’ll be able to use features like window snapping to display an Android app side-by-side with other Android or Windows applications.

Microsoft worked with Intel Bridge Technology to ensure that Android apps developed for phones with ARM-based processors can run natively on PCs with x86 chips (including those with AMD processors) thanks to a runtime post-compiler.

Thanks to a Windows Subsystem for Android (WSA), which works similarly to the existing Windows Subsystem for Linux (WSL), you can run Android apps as if they were native Windows applications. There’s basically an Android operating system installed I’m a virtual machine on your Windows PC, but every time you install an Android app, Windows 11 creates a native proxy app that allows it to work like a native app, meaning it can show up in your Start Menu and taskbar and it supports pinning, resizing, and window snapping.

Officially, the way to install Android apps on Windows is through Microsoft’s app store. The company has partnered with Amazon to integrate the Amazon Appstore with the Microsoft Store, which means that you’ll be able to search for, install, and manage Android apps alongside Windows apps. But it also means that you’ll have access to a library of about half a million Android apps which receive updates delivered by Amazon rather than the millions of apps available in the Google Play Store with updates delivered by Google.

That means you also won’t get access to Google apps including Gmail, Google Maps, and the official YouTube apps. But those omissions probably aren’t as significant on a Windows 11 PC as they would be on an Android phone or tablet (or devices like Amazon’s Fire tablets, which run a Google services-free fork of Android). 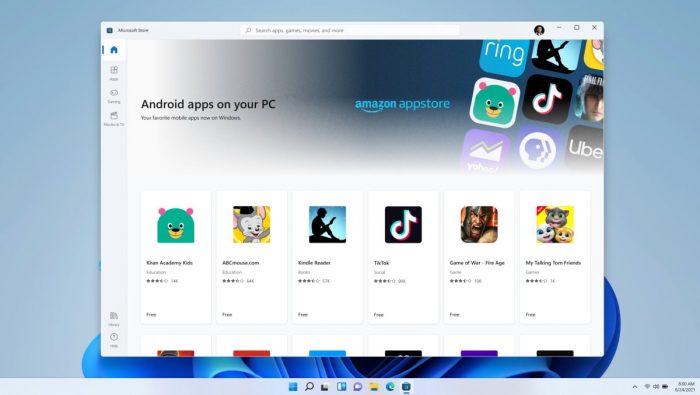 Update: You can sideload Android apps.

It also means one less reason to install a third-party tool like Genymotion or BlueStacks on Windows PCs. 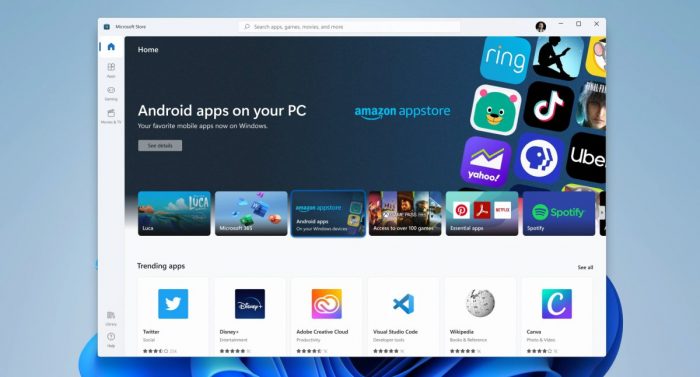 Windows 11 will be available to the general public later this year, but pre-release builds should start rolling out to members of the Windows Insider Preview program soon.