Windows 11 is set to launch this fall, and the new operating system brings an updated user interface as well as new features for multitasking, support for running Android applications, and a number of security and performance improvements.

But Microsoft is also increasing the minimum system requirements – not all computers that can run Windows 10 will be able to upgrade to Windows 11 through Windows Update. The good news is that after getting feedback from customers, Microsoft has decided to expand the system requirements to include some computers with older hardware. The less good news is that the update won’t change things very much for most users. 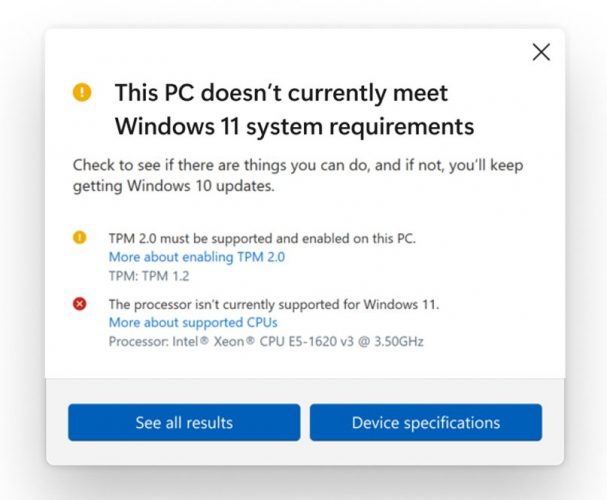 Microsoft confirmed in June that Windows 11 would be compatible with most computers with 8th-gen or newer Intel processors or AMD chips featuring Zen 2 or newer CPU cores. But the company also promised it would consider adjusting the minimum system requirements to support some 7th-gen Intel or AMD Zen 1 processors.

Now the company has announced the results of its review:

One upshot? The Microsoft Surface Studio 2, which was first released in 2018, will be able to run Windows 11. That’s probably good news for folks who paid $3500 or more to get one. It’s also just common sense, since Microsoft still sells the Surface Studio 2. Limiting it to Windows 10 wouldn’t have been a good look for the company.

While Microsoft is basically ruling out most processors that are more than a few years old, it’s not necessarily because Windows 11 requires a super-fast processor. Most recent entry-level Intel Atom, Celeron, Pentium chips are supported, as are entry-level AMD processors and some Qualcomm Snapdragon chips. And you only need a computer with 4GB of RAM and 64GB of storage to run Windows 11.

But Microsoft is stepping up its security requirements. You need UEFI Secure Boot and TPM 2.0. And that rules out many older computers.

The company says computers that don’t meet the minimum requirements are more than 50% more likely to have kernel mode crashes. And restricting Windows 11 to newer hardware helps ensure both a certain level of security and compatibility with core applications.

Not sure if your computer will run Windows 11? Microsoft has released an updated preview of its PC Health Check app to members of the Windows Insider program and it will be available to the general public later this year.

The new tool not only updates the list of compatible processors, but also provides clearer messaging to let you know what, if anything, is keeping your system from meeting the minimum requirements.

And if your computer doesn’t qualify for the update, you can just keep using Windows 10… Microsoft says it will continue to support the operating system through October 2025 and plans to make some Windows 11 features (like the new Microsoft Store) available in Windows 10 eventually.

Another option? The Verge reports that Microsoft won’t stop you from downloading a Windows 11 disc image and using it to perform a manual install of Windows 11 even on hardware that’s officially unsupported (including computers with older Intel or AMD chips or systems that lack TPM 2.0). But Microsoft isn’t promising that you’ll get the same level of performance or stability if you do that. And, of course, the install process is a lot more cumbersome than downloading an update through Windows Update.

Or you could always switch to an alternate operating system (maybe a GNU/Linux distribution like Ubuntu, MX, Manjaro, Debian, or Fedora) if you want to jump off the Windows upgrade cycle and don’t plan to replace your computer hardware in the next four years.