Microsoft has been including speech recognition software in Windows for years, but historically it’s been designed as an accessibility setting that allows you to input text by talking instead of typing.

Soon you’ll also be able to launch and switch between apps, browse the web, and generally control your computer by voice thanks to a new Voice Access feature coming to Windows 11. A pre-release version of the feature is rolling out now to members of the Windows Insider program on the Windows 11 dev channel. 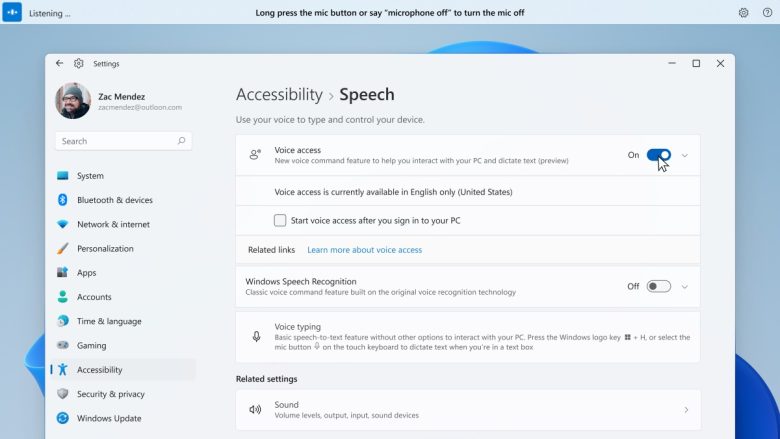 The new Windows 11 Insider Preview Build 22518 brings new desktop backgrounds, a new Taskbar shortcut for the Widgets panel, and makes it easier to install the Windows Subsystem for Linux from the Microsoft Store.

But one of the biggest changes is the introduction of Voice Access, which allows you to do say things like:

You can also interact with areas of the screen that don’t have names by using number overlays. Just say “show numbers” and a list of numbers will appear on the screen, and you can tell Voice Access to “click 7” or any other number and then say “hide numbers” it make the overlay disappear.

A grid overlay can also divide the screen into sections, allowing you to click in the center or a specific region after saying “show grid.”

And you can still use your voice to enter and edit text using voice commands as well.

Voice Access can be toggled from the Windows 11 Settings app by navigating to Settings > Accessibility > Speech. Once enabled, you can tell your Windows 11 PC to start listening for Voice Access commands by hitting Alt+Shift+C or turn it off with Alt+Shift+ B, set your computer to automatically start Voice Access when Windows starts up, or use a voice command:

Keep in mind that the feature is still a pre-release preview and there’s a chance that some things could change before Voice Access is made widely available to all Windows 11 users.