When you’re using a dual-screen Windows device like the upcoming Microsoft Surface Neo, you’ll be able to view apps on a single screen, span them across displays, or take advantage of the new form factor to hold your dual-screen device like a book, with different content on each display.

But you can also use the Surface Neo like a laptop by attaching a magnetic keyboard to the bottom screen. It doesn’t cover the whole display though — there’s a strip of touchscreen that’s still visible above the keyboard. And on computers running the new Windows 10 X operating system, that strip is where you’ll find a new feature called the Wonder Bar. 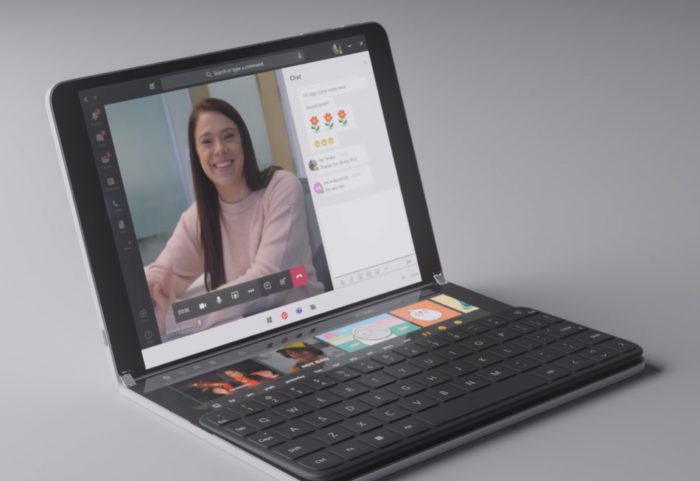 Microsoft sort of teased this feature when the company first unveiled the Surface Neo. But now that the company has released developer tools and an emulator for Windows 10X, we have more details about the Wonder Bar… including its name.

The company says the Wonder Bar “enables the familiarity of a laptop while increasing productivity by hosting system-provided input accelerators and a virtual trackpad for precision mouse input.”

In other words, at the most basic level, when you use a dual-screen computer like the Surface Neo as a laptop, the area above the physical keyboard can act like a touchpad. While the Wonder Bar works with physical keyboards, users can also activate it by switching to a virtual keyboard with Wonder bar support. And since the Wonder Bar is a touchscreen display rather than a typical laptop trackpad, it enables support for rich input including emojis, GIFs, and text suggestions.

Beyond input, the Wonder Bar can be used to display things like videos or other content. App developers can take videos that would normally be seen in picture-in-picture mode, for example, and move them to the Wonder Bar, giving you an unobstructed view on the upper display.

Some apps will also move media playback controls to the Wonder Bar. And other apps may take advantage of the Wonder Bar in other ways — for example Microsoft says the Windows Calculator app has an “always-on-top” mode that will make it stay visible in the Wonder Bar while you’re using other apps.

It’ll be up to developers to integrated Wonder Bar support into their applications, so not every Windows program will use the extra space. But if the idea catches on, it could make dual-screen Windows 10X devices a lot more useful in laptop mode… maybe even more useful than traditional Windows laptops.

As for non-Windows laptops? There’s always the MacBook Pro with its Touch Bar. While that thin touchscreen strip above the keyboard may not be large enough to display video, it does provide additional functionality for some Mac apps.