Microsoft’s Windows 10 operating system is set to launch this summer, with versions PCs, smartphones, tablets, and other devices. Ahead of that launch, Microsoft is outlining the different versions of Windows 10.

There will be 6 or more different Windows 10 editions, although only 3 of them are really aimed at consumers. The others are for enterprise and education customers. 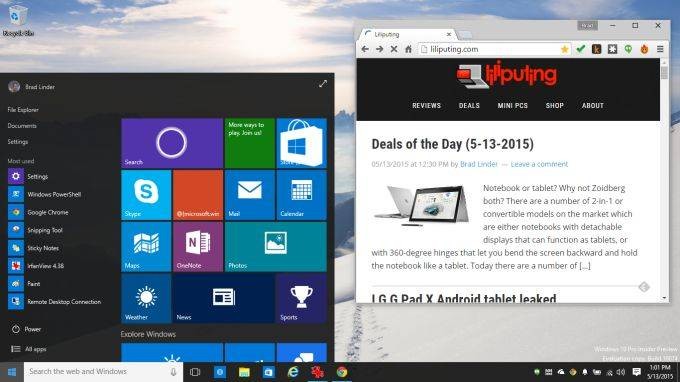 Windows 10 Home is the consumer-oriented operating system for desktops, notebooks, tablets, and 2-in-1 devices. It will have most of the features we’ve seen in Windows 10 Technical Preview releases including the Microsoft Edge web browser, Cortana digital assistant, Start Menu, Windows Store, and more.

Windows 10 Pro has everything you’ll find in the Home version, plus features which Microsoft says are aimed at small businesses including security, productivity, and remote access features.

Windows 10 Mobile is the name of the operating system that will run on smartphones and small tablets (with 7 inch and smaller displays). It has a Start Screen instead of a Start Menu, a touch-optimized user interface, and mobile versions of Office apps including Word, Excel, and PowerPoint.

All three of these Windows 10 editions include versions of Microsoft’s Continuum software, which allows you to transition between touch-optimized and desktop modes. For Windows 10 Home and Pro that means you can automatically switch between a tablet and desktop user interface when connecting your tablet to a keyboard or other docking station. Continuum for phones lets you hook up your Windows 10 Mobile smartphone to an external display, keyboard, and mouse and use mobile apps as if they were desktop apps.

It’s interesting to note that Microsoft used to call its smartphone operating system Windows Mobile, before changing the name to Windows Phone with the launch of Windows Phone 7 in 2010. Maybe the company can revive another old name to describe smartphones designed to be used as desktops with the Continuum feature: Pocket PC.

It’s also worth noting that none of these editions will feature Windows Media Center: it’s dead. If that’s a Windows feature you use regularly, you’ll either want to refrain from updating, or check out our list of alternatives to Windows Media Center.

Windows 10 Enterprise has everything you’ll find in Windows 10 Pro, plus Windows Update for Business and other features available to volume licensing partners.

Windows 10 Education is similar to the enterprise edition, but it’s aimed at teachers, administrators, and other professionals in the education market.

These editions are all in addition to Windows 10 for IoT Core, a new version of Windows aimed at low-power devices like the Raspberry Pi 2 mini computer. There will also be Enterprise versions of Windows 10 aimed at industrial and retail devices including ATMs, point-of-sales machines, and robotics.

On the other hand, not all apps developed for desktops will run on mobile devices… or ATMs. So in some ways Windows 10 is a lot like all earlier versions of Microsoft’s flagship operating system: there are different versions with different price points and feature sets.

For the first year after Windows 10 launches, Windows 10 Home, Windows 10 Pro, and Windows 10 Mobile will be available as free upgrades for folks running qualifying versions of Windows 7 or later or Windows Phone 8.1.

There’s no word on how much the operating systems will cost if you want to buy them outright for installation on a new PC or one that’s not running a version of Windows that qualifies for an upgrade.