As the name suggests, this update will be incremental rather than revolutionary. But while some of the most exciting stuff in the Creators Update included things like Paint 3D that most people will never use, the upcoming fall update actually has a couple of really useful new features… and it introduces a new design language that you’re likely to see in Windows apps.

Microsoft has also revealed that a few high-profile apps are coming to the Windows Store, which means, among other things, that they’ll be available for use on Windows 10 S.

First up, there’s Fluent Design, a new design language that streamlines colors, adds some transparency effects, and generally gives the OS and some apps a fresh coat of paint.

Next, there’s a new Pick Up Where you Left Off feature, which helps bridge the gap between your PC and mobile device. Microsoft is increasingly aware that you probably don’t have a Windows Phone. But this feature lets developers build apps for Android and iOS that can communicate with their counterparts on Windows. That way you can start an activity on one device and continue on a different device seamlessly.

Likewise, the new Clipboard is a cloud-based service that lets you copy on iOS or Android and paste on Windows, or vice versa.

And Microsoft would really like you to use its OneDrive cloud storage service and is providing a new reason to do so with the OneDrive Files on Demand feature, which lets you not only backup files to the cloud, but to store them online and only download them to your local device when you need them. In other words, you can save space on your local device at the same time as saving your work in a way that makes it easy to share and which protects your data if your PC dies. 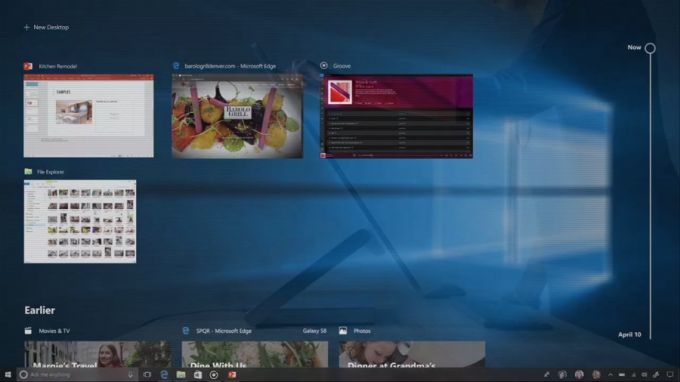 Windows 10 is also getting a new Timeline feature that’s sort of like a task switcher that doesn’t just show currently running activities, but also your history. Thanks to thumbnail shortcuts, it’s easy to get an idea of what you were working on yesterday or last week and go back to that activity.

Other announcements at the MS Build developer event today include: