Microsoft is expected to unveil a low-cost “Cloudbook” laptop in early May. It’ll probably be aimed at the education market, and it could be one of the first devices to run a new, stripped-down version of Windows called Windows 10 Cloud. But while Microsoft will sell its own hardware, it’s probably hoping not to be the only company offering Cloudbooks.

And now the folks at Windows Central have obtained a document detailing the minimum specs for upcoming Windows 10 Cloud hardware. It’s likely that Microsoft’s Cloudbook will at least meet these minimum specs, but they could also pave the way for a whole new generation of cheap laptops with decent hardware. 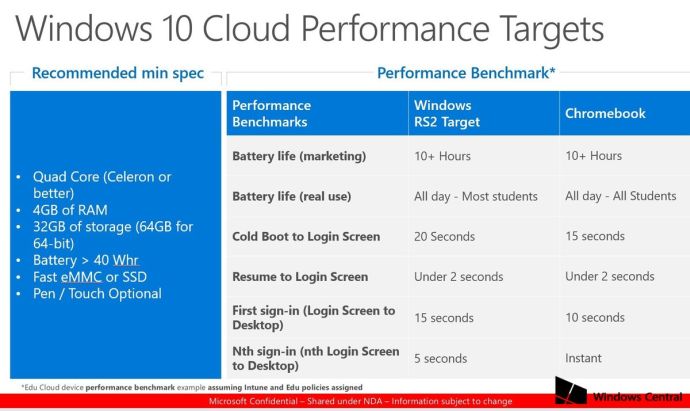 Keep in mind, these are the minimum specs, which means we could see some Cloudbooks with better hardware. But he’s an overview:

Touchscreen displays and support for pen input are listed as “optional,” which means they’re not exactly minimum recommended specs… but Microsoft does expect some device makers to offer those features.

Overall the goal is to offer a user experience that’s comparable to what you’d expect from a Chromebook, and the document posted by Windows Central is surprisingly frank: Microsoft expects to be competitive in terms of battery life and resume-from sleep. But the targets for cold boot speed and first sign-in are a bit slower than those for Chromebooks (although Windows boot and login speeds have come a long way from years past when it could take minutes for a Windows computer to boot).

At a time when Chromebooks are becoming increasingly common in the classroom due to low cost, ease-of-use, all-day batteries, and strong security, it makes sense for Microsoft to develop an alternative.

What remains to be seen is whether a Windows 10 Cloudbook will hold any appeal outside of the classroom. One of the big differences between Windows 10 Cloud, Home, and Pro editions is that the Cloud version is expected to only support installation of Windows Store apps, which means that it’s much more tightly locked down than the consumer and professional versions of Microsoft’s operating system.

While that might be a selling point for educators (and maybe some business customers), it makes Windows 10 Cloudbooks seem like less-capable siblings to existing low-cost Windows notebooks, which could lessen their appeal.

Of course, the ability to run some Windows apps could still make a Windows 10 Cloudbook more attractive to some folks than a Chromebook, which only runs web apps and Android apps (unless you install Linux or use Windows emulation software). But given the sad state of the Windows Store (and the addition of the Google Play Store to many recent Chromebooks), you could argue that Chromebooks may be more capable than Windows 10 Cloudbooks.

Or maybe Microsoft has some surprises for us that’ll change our way of thinking about the Cloudbook platform. I guess we’ll find out on May 2nd.