There are a growing number of Windows computers with higher-than-1080p displays. Desktop users can buy 4K monitors. Laptop customers have plenty of options for notebooks with 2560 x 1440 pixel, 3200 x 1600 pixel, or even 3840 x 2160 pixel screens. And tablets like the Microsoft Surface Pro 4 and Asus Transformer 3 Pro also have high-resolution screens.

But not all Windows software looks good on high-res displays. Windows Store apps designed for Microsoft’s new Universal Windows Platform do a pretty good job of scaling to high-res or lower-res screens. But some classic Windows programs can look funny due to tiny text, graphics, title bars, or other problems.

With Windows 10 Anniversary Update, Microsoft’s trying to make it easier for developers to enable scaling in their software for screens with different pixel densities. 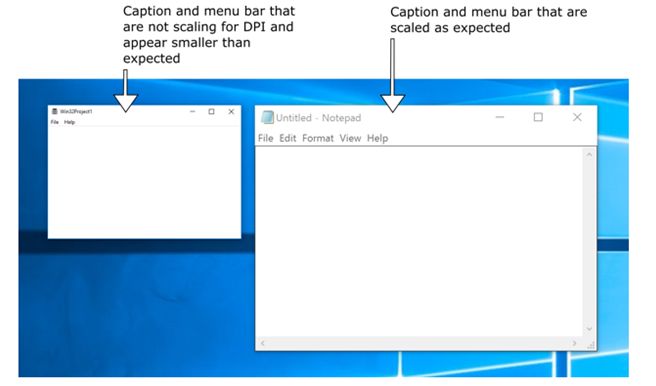 While Windows has offered a way to “change the size of text, apps, and other items” for years, switching from 100% to 150% (or any other value) can lead to some items looking blurry or other items looking too tiny to see.

Unfortunately there’s no simple switch Microsoft can pull to automatically ensure every Windows program in existence looks as good on a 4K display as it does on a 720p screen… or adjust properly if your screen resolution changes or use multiple displays with different resolutions.

But there are now tools that let developers:

It’ll still be up to developers to update their software: so if you’re using an image editing utility or accounting software that hasn’t been updated in a decade, don’t expect it to magically look good on a high-DPI display just because you’ve installed Windows 10 Anniversary Update. But it’s nice to know Microsoft is trying to make it easier for developers to ensure their programs can handle DPI scaling better, without forcing them to convert their software to Universal Windows Platform apps.

You can find more details about the DPI scaling changes in Windows 10 Anniversary Update in a blog post at Microsoft’s Technet site.