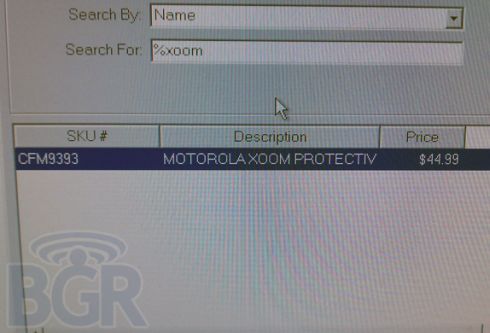 The Motorola XOOM tablet is currently available in two versions: A 3G model that’s sold by Verizon and which will soon get a 4G LTE mobile broadband upgrade, and a WiFi-only model. Now the folks at BGR have received a tip suggesting that a third option may be available soon. Sprint is expected to sell a Xoom tablet with 4G WiMAX connectivity instead of LTE technology.

Right now the whole thing comes from anonymous tipsters and a screenshot of an inventory screen showing that Sprint will carry a case for the Motorola XOOM. It’s not a lot to go on, but I wouldn’t be at all surprised to see Motorola push expand the availability of its Android tablet.

As the first tablet to launch with Android 3.0, the XOOM has pretty much dominated the Android tablet headlines for the last month or so. That may soon change as Acer, Asus, HTC, and virtually every other mobile device maker in the world prepare to launch their own Android tablets in the coming months.