Microsoft has been working with Qualcomm and PC makers to develop Windows 10 software that will run on low-power computers with Qualcomm Snapdragon 835 processors.

Unlike the now-defunct Windows RT, Windows 10 on ARM will be able to run just about any Windows application including those designed to run on x86 chips. That’s because ARM-based processors have gotten a lot more powerful in recent years, allowing devices with chips like the Snapdragon 835 to emulate x86 architecture when running apps that don’t run natively on ARM.

While the first Windows 10 on ARM devices will likely have Qualcomm’s Snapdragon 835 chip, it’s possible that future devices could have processors from other chip makers. 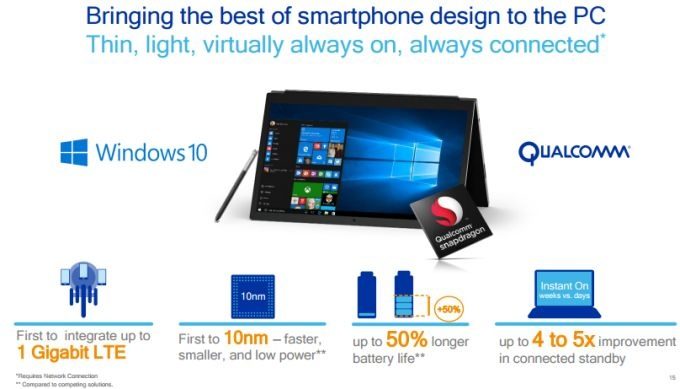 For example, Fudzilla reports that Microsoft approached NVIDIA to talk about optimizing Windows 10 for the company’s Tegra chips. But NVIDIA allegedly took a pass… for now.

While NVIDIA’s Tegra X1 processor powers the company’s Shield TV device, it’s been a few years since a NVIDIA released a new Tegra chip aimed at mobile devices such as phones or tablets. The company has been focusing on the automotive space instead.

But the fact that Microsoft is said to have approached NVIDIA indicates that there’s nothing special about Qualcomm other than the fact that the company said yes. If the first Windows on ARM devices prove popular with consumers, it’s possible that NVIDIA and other chip makers could partner with Microsoft in the future.

So don’t be surprised if a year or two from now we start to see Windows 10 devices with Samsung Exynos, NVIDIA Tegra, Huawei Kirin, or MediaTek processors.

But if the first Windows 10 on ARM devices flop, then don’t be surprised if we don’t see any of those chip makers jump on board.

On the one hand it’s easy to see the appeal of Windows 10 on ARM: you get the same kind of low power consumption and always-connected features available on today’s smartphones… but with support for full-fledged Windows applications. That could mean laptops, tablets, and convertibles with all-day battery life, support for push notifications even when the display is off, and thin-and-light designs.

On the other hand, there have been some indications that Windows computers with Snapdragon 835 chips won’t be as fast as Android devices with the same processors, suggesting that Windows 10 isn’t really optimized for ARM just yet. If these new always-connected computers aren’t competitive with existing Intel or AMD-powered options when it comes to price, performance, or both, then it’s unclear how much demand there will really be.

Meanwhile, Google has already shown that it’s possible to build a desktop operating system that’s CPU architecture agnostic. You can already find Chromebooks with ARM-based processors from Rockchip or MediaTek, or x86 chips from Intel. Theoretically the former could enable longer battery life and/or more compact designs, but in practice the biggest difference seems to be in price: models with ARM chips tend to be cheaper than equivalent systems with Intel processors.

12 replies on “Will Windows 10 run on NVIDIA Tegra, Samsung Exynos, or MediaTek chips”