Less than a year and a half after HP acquired Palm for $1.2 billion, it looks like HP may be ready to sell — and Amazon may be first in line to buy what’s left of Palm. VentureBeat reports that HP is looking to sell off its Palm assets and that Amazon is the company most likely to actually click the purchase button. 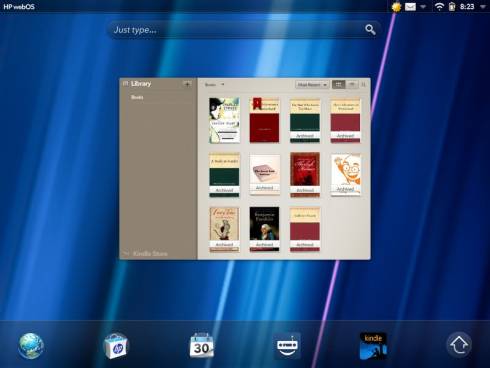 The report comes just a few days after Amazon introduced its first tablet… running Google Android rather than HP/Palm’s webOS software. But the Kindle Fire uses a highly customized version of Android — in fact if it didn’t run third party Android apps you’d probably never even know it was Android. Meanwhile, Amazon already offers a pretty decent Kindle app for webOS and it probably wouldn’t be hard for the company to port its Amazon MP3 and Video apps to run on webOS as well.

By acquiring its own operating system, Amazon would have far more control over any future Kindle products it produces. And while Amazon has launched its own Android Appstore, any Palm purchase would likely include the HP/Palm App Catalog — so it’s not like an Amazon webOS tablet wouldn’t offer third party apps.

It might also be possible to develop tools that would allow some Android apps to run on webOS using a Java virtual machine. That would be similar to what Research in Motion plans to do with its upcoming software update for the BlackBerry PlayBook tablet which runs BlackBerry Tablet OS.

There’s one thing that’s not likely to happen if Amazon does acquire webOS from HP. Amazon probably won’t resurrect the HP TouchPad line of tablets. While the tablet has proved wildly successful in its afterlife due to an 80-percent off fire sale, Amazon’s not interested in producing tablets for tablets sake.

Amazon sells media, and the Kindle Fire is delivery system for digital music, movies, books, and apps purchased from Amazon’s content stores. I suspect any future devices will look a lot more like the Kindle Fire, with its simple, media-oriented user interface than the general purpose HP TouchPad tablet.

6 replies on “Will Amazon buy Palm/webOS from HP?”