Amazon currently offers two types of Kindle devices. You can pick up an inexpensive Kindle with a black and white E Ink display designed primarily for reading eBooks. Or you can buy a Kindle Fire tablet which can also run apps, play movies, and do much more.

Maybe one day there will be another option: a Kindle eReader with a color display for viewing photos, comic books, magazines, and other content. 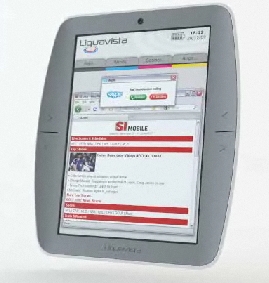 Bloomberg reports that Samsung is looking to sell Liquavista to Amazon. Liquavista is  a subsidiary it acquired a few years ago. It makes low power color displays that are viewable outdoors thanks to electrowetting technology.

A few months ago Nate at The Digital Reader spotted some evidence suggesting Amazon and Samsung were in talks. Now Bloomberg is citing “a person familiar with the matter” who says Samsung wants to sell Liquavista for under $100 million.

Samsung hasn’t delivered any products featuring Liquavista technology since acquiring the company more than two years ago. In fact, the top story at the Liquavista website is still “Liquavista gets acquired by Samsung.”

Meanwhile the market for eReaders seems to be declining (eBook sales are still high, but many people are reading them on tablets, phones or other devices).

So selling Liquavista to one of the biggest existing players in the eReader space would make sense for Samsung.

What remains to be seen is whether it makes sense for Amazon. The company has been pushing its Kindle Fire tablets to customers looking for a color eReader which can also handle music, video, and other tasks.

A color Kindle with a Liquavista display, on the other hand, would primarily be good for reading. But it might be very good for reading, since the low power display would allow for much longer battery life than you get from a Kindle Fire tablet.

Update: Yup, looks like Amazon is the proud new owner of Liquavista.

5 replies on “Will Amazon buy Liquavista, and would that lead to color Kindles?”