The Wikipad is an Android tablet aimed at gamers. Not only does it have a 1.4 GHz NVDIA Tegra 3 quad-core chip and a 10.1 inch, 1280 x 800 pixel IPS display, but it also comes with a removable hand grips which add video game controller buttons to the tablet.

First introduced in January, the Wikipad goes up for pre-order from GameStop on September 7th for $499, and it will be available starting October 31, 2012.

Update: Shipments have been delayed. 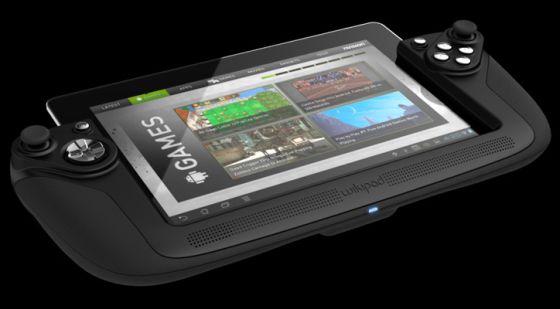 The tablet will be able to handle games downloaded from the Google Play Store, Sony PlayStation Mobile suite, or the NVIDIA Tegra Zone.

The WikiPad features 1GB of RAM and 16GB to 32GB of storage. There’s also a microSD card slot for extra storage.

On the one hand, the $499 starting price makes the Wikipad look awfully expensive next to an Amazon Kindle Fire HD tablet or even an Asus Transformer Pad TF300T. But neither of those tablets features an Xbox-style video game controller.

French tablet maker Archos does have a gaming tablet in the works, with built-in controllers to the sides of the screen. But the Archos GamePad has a 7 inch screen and a 1.5 GHz dual core processor.

The biggest challenge tablets with physical buttons for gaming face is the fact that most Android games are designed to be played with your fingers and a touchscreen, not a console-style game controller. But the Wikipad’s support of Playstation titles should make those buttons useful. I also suspect folks that want to run emulators for classic video game consoles to get in a little Mario Kart action will find the gamepads helpful.

3 replies on “Wikipad gaming tablet coming on Halloween for $499”