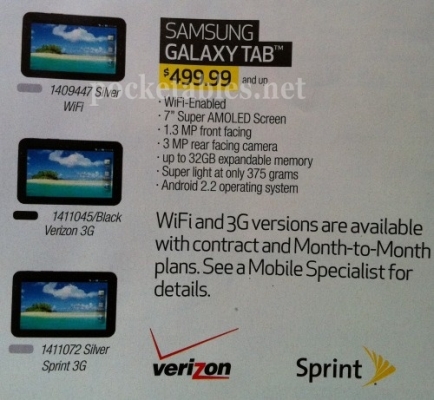 We already know that Verizon plans to offer a 3G enabled version of the Samsung Galaxy Tab Android tablet for $600 and up starting next month. Now it looks like there may be a cheaper option for anyone who doesn’t need the 3G. Pocketables found a product listing from Best Buy showing that the US retailer plans to offer a WiFi only version for $499.99 and up.

Best Buy will also apparently sell the 3G version, allowing customers to sign up for service with Verizon or Sprint. AT&T and T-Mobile are also expected to offer the tablet in the United States. The Best Buy listing states that the 3G models will be available with both month-to-month plans and long term contracts. It should be interesting to see whether signing up for a contract helps bring the price down, or if it just means that monthly data bills will be lower.

The Samsung Galaxy Tab has a 7 inch, 1024 x 600 pixel capacitive touchscreen display, a 1GHz Samsung Hummingbird processor, and runs Google Android 2.2. It has a 4,000mAh battery, 16GB of storage, and two cameras, one on the front and another on the back. It has GPS support, can handle Adobe Flash, and can handle 1080p HD video playback.

So the question is… does the lower price and lack of a service contract make you any more likely to buy a Galaxy Tab? Or would you rather spend $500 on an iPad… or two cheap Windows netbooks?

Update: Sprint will apparently offer a 3G version of the Galaxy Tab for $400 when you sign up for a monthly service plan running $30 per month for 2GB of data or $60 per month for 5GB.