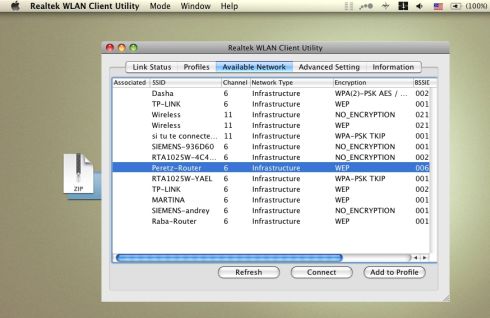 OS X is only officially supposed to run on Apple-labeled hardware. But ever since Apple started using Intel chips in its Mac line of computers hackers have been figuring out how to load the operating system on unsupported machines. And at this point almost every Intel Atom-powered netbook has run OS X at least once or twice. But the darling of the hackintosh crowd is the MSI Wind, because there’s a custom version of OS X floating around that supports practically all of the hardware out of the box.

The one stumbling point to date has been the WiFi drivers. If you wanted to add WiFi support to an MSI Wind running OS X a week ago, you would have had to swap out the internal WiFi module or purchased a USB dongle. But now some members of the MSI Wind.net forums have discovered an official Realtek driver that supports the WiFi module that MSI uses in the Wind U100.

The driver isn’t available at the Realtek or MSI web sites yet, and since OS X isn’t officially supported on these computers it may never be. But if you read through the forum you may be lucky enough to find some working download links.