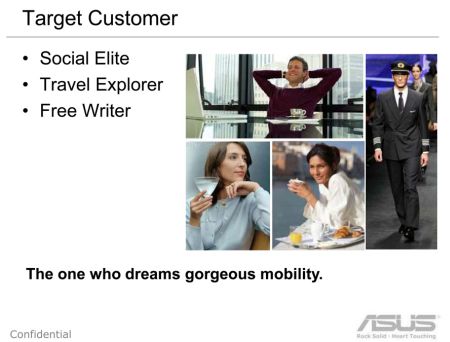 The Asus Eee PC S101 is thinner and lighter than other Eee PC models. And it comes with more storage capacity thanks to a 32GB or 64GB solid state disk. That’s all pretty sweet. But it also has a starting price of $699, which is more than $200 more than the Eee PC 1000H, which has nearly identical specs. Is a 32GB SSD and thinner, lighter case worth that much? Who exactly is the target market for this netbook anyway? It turns out a leaked sales kit for the Eee PC S101 provides some hints.

Apparently Asus expects pilots and martini drinkers, among others, to be interested in the S101. Social Elites, and “free writers” also make the list. If free writer means freelance writer, I feel comfortable telling you that I’m a freelance writer and I don’t plan to drop $700 on an S101. Perhaps they mean people who write for free because they have so much money they don’t need to work for pay?

Some of the other slides in the sales kit are a bit more informative. For example, it appears that the Eee PC S101 uses MLC flash memory, which is typically slower than SLC solid state disks. But Asus claims that thanks to a new controller, the MLC disks in the S101 peerform faster than some  SLC disks.

The S101 also has a significantly thinner battery than other Eee PC models, which helps keep the profile of the computer down. Another slide shows just how much thinner the S101 is than other netbooks, including the “MSI Wing” notebook. I’m going to go out on a limb and assume they mean Wind. Either way, the S101 is certainly thinner. But in my humble opinion, hardly $200 thinner. You can check out that slide after the break.

You can also read more about the Asus Eee PC S101 in the Liliputing Product Database. 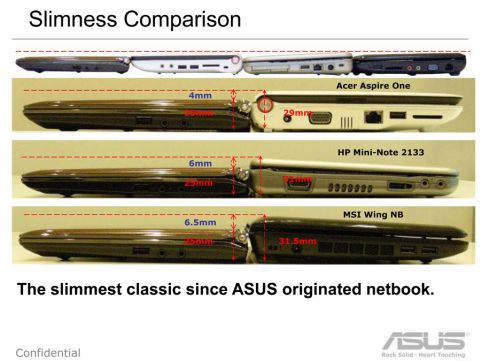