Microsoft is holding an event on October 6th, where the company is expected to unveil a next-gen Surface Pro tablet and the two most powerful Windows phones to date. Not sure you believe all the leaks and rumors? No problem: Microsoft may have just accidentally issued a bit of confirmation.

The Microsoft Store UK website now has some details about the Lumia 950 and Lumia 950 XL smartphones. 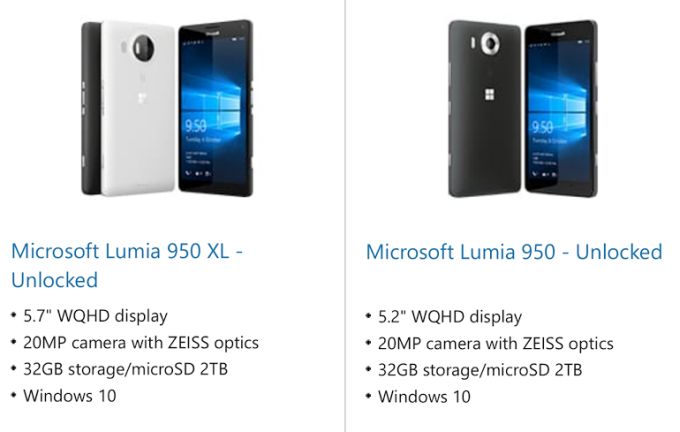 You can’t actually view prices or detailed specs for either phone yet. But if you look at the list of Lumia phones, you’ll find Microsoft’s newest phones at the bottom of the page, along with thumbnail photos and an overview of some of the most important specs.

The website confirms that both phones feature Windows 10 software, 32GB of built-in storage, microSDXC cards capable of handling up to 2TB of removable storage, and 20 MP cameras with ZEISS optics.

There are some other things we’re pretty sure we know about the phones, but which aren’t mentioned in the website listing (yet):

I suspect the Microsoft Store will be updated shortly to remove all mention of the Lumia 950 and 950 XL. But the truth is already out there.

6 replies on “Whoops! Lumia 950 and 950 XL show up early on the Microsoft Store website”