Windows 8 will be the first version of Microsoft’s flagship operating system to ship with an app store. It’s called the Windows Store, and it will be the only officially sanctioned place to download free and paid apps designed for the new Windows 8 Metro style full-screen interface.

But right now the Windows Store looks a bit like a ghost town. During the weeks that I was testing the Kupa X11 tablet with Windows 8 Consumer Preview I kept checking the store for new apps, and I kept failing to find any.

Recently Forbes noted that there are only 99 apps in the store. There are a few really nice apps such as the Kobo eBook app and Flixter movie app. But there’s no Netflix app, only a handful of games, and generally the selection is pretty small. 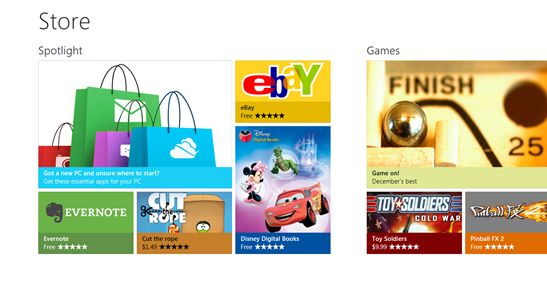 That’s not a huge surprise since Microsoft is just starting to accept early submissions from developers. The number of Windows 8 Metro style apps will likely be much higher by the time the operating system goes on sale later this year.

But there are a lot of people using Windows 8 today. Microsoft recently noted that there are twice as many people already testing the Windows 8 Consumer Preview than there were people trying out Windows 7 beta during the same period a few years ago.

The good news is that if you’re running Windows 8 on a computer with an x86 processor you can run millions of existing Windows app. And virtually everyone is using x86 hardware, since you need Windows RT for ARM-based hardware, and that’s not available to the public yet.

But right now if you’re hoping to take Windows 8 for a spin, don’t expect to be able to find nearly as many touch-friendly apps as you’ll find for the iPad, Android devices, or even Windows Phone devices.

5 replies on “Where are all the Windows 8 Metro apps?”