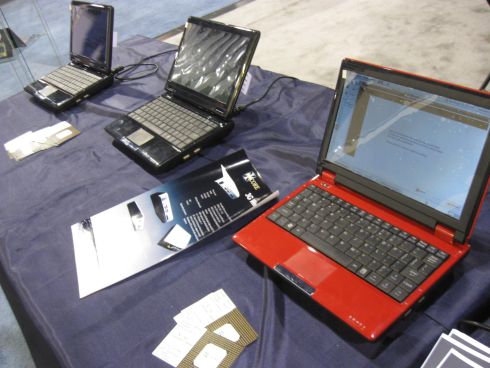 After having played around with an 8.9 inch NorhTec Gecko Edubook for the past few weeks, I got a chance to meet up with the folks from NorhTec at CES. They were showing off several new devices including an upcoming 10 inch netbook and the recently launched Gecko Surfboard computer-in-a-keyboard.

There was also a demo unit of the 8.9 inch netbook running Puppy Linux. While Windows XP and WattOS both felt pretty sluggish on NorhTec’s Edubook with its slow 1GHz XCore86 processor, Puppy absolutely flew. I’m looking forward to testing this light weight Linux distribution on the Edubook more once I get back to the home office.

The 10 inch netbook features a larger display, of course. But it’s actually a little thinner than the 8.9 inch model. That’s because NorhTec decided to use a traditional power brick-style power supply with this model. The smaller Edubook doesn’t come with a brick. You just plug the power cord directly into the back of the netbook.

NorhTec doesn’t plan to release the 10 inch netbook until March or later. It will likely ship when the upcoming 1.5GHz XCore86 processor is ready. The goal is to get the x86-compatible CPU to the point where it can easily handle playback of standard definition YouTube videos.

The Gecko Surfboard is available with the same 1GHz CPU that comes with the 8.9 inch Edubook. But because there’s no display, to deal with, NorhTec was able to keep costs quite low. The Surfboard costs just under $100.

Like the Edubook, the Surfboard isn’t exactly a multimedia powerhouse. But the computer is powerful enough to handle basic tasks such as web surfing or editing office documents. It could also power a retail Point of Sales system.

NorhTec has produced about a thousand Edubook notebooks so far. And most of them have been sold, primarily to customers looking to kick the tires and determine if the system is right for them. The company hopes to ship as many as 50,000 this year. The goal isn’t exactly to become the next Asus or even the next OLPC… at least not overnight. Rather, NorhTec is bringing its vision of modular, easy to upgrade systems to niche and developing markets.

For instance, existing Edubook users will be able to pick up one of the new 1.5GHz processors when they’re available and just slap them into the netbook much the same way you can upgrade the RAM on most notebooks. The same thing will be possible when the next processor comes along, which is likely to be a 2GHz chip due out before the end of the year. Of course, each of those chips will drive up the price. Part of the appeal of the 8.9 inch Edubook with the 1GHz processor is its low starting price of just $199.

You can find more photos from the Norhtec CES booth in the gallery below.