Google’s next version of Android is set to launch in the third quarter of 2015. That’s when Google will release the software to the public and release the source code so that phone and tablet makers can bring the update to their users. 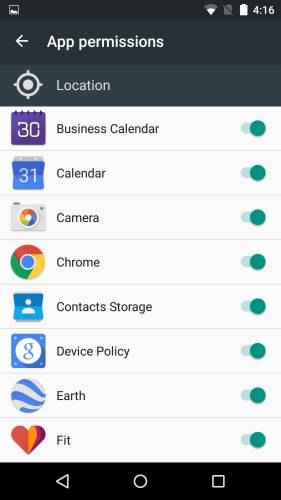 But developers and early adopters can try an early version. Google released an Android M Developer Preview on the first day of the Google I/O developer conference.

So what’s new in the latest version of Android? Google says there are over a hundred changes, but here are some highlights.

Want to upgrade, replace, or factory reset your device, but worried that you’ll lose all of your saved app data? Android M’s got you covered.

Google is introducing automatic app data backup. Your data will be backed up to Google Drive every 24 hours as long as your device is idle, charging, and connected to a WiFi network. 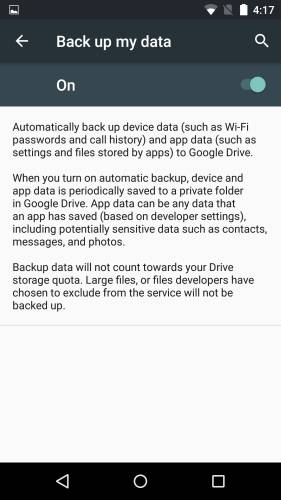 Then when you uninstall and reinstall an app or switch to a new device, not only will the app be downloaded again, but so will your data.

During the developer preview period users will be able to store up to 25MB of data per app. Google hasn’t announced how much data it will allow after the preview period ends, but there’s no charge to users or developers.

That said, there are some things that won’t be backed up, including some types of cached data, files located on external storage, or any files a developer explicitly says should not be backed up.

In earlier versions of Android, you’d see a list of permissions used by an app before you downloaded it form the Play Store. This would let you decide whether or not you wanted to install an app that could see you contact list, access your phone dialer, or use your microphone, for instance.

But you couldn’t easily download an app and just disable certain permissions unless you used unofficial tools. 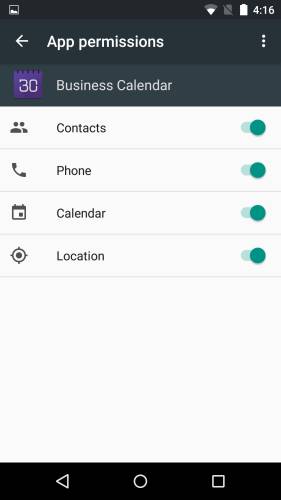 You can also go into settings later to adjust permissions for each app even after you’ve made your initial choices.

Note that developers will need to update existing apps to support Android M before they can take full advantage of the new permission model.

Google Android has a somewhat complicated history with external storage devices. One of the key things that set early Android phones apart from iPhones was Google’s support of microSD cards… but over time Android has been modified to limit the ways you can actually use a microSD card.

That makes sense, since SD cards tend to be slower than built-in storage and more prone to failure, so you might not want to store all of your important data on those cards.

But some folk really like the option to use external storage… and they might be happy to know that Android M includes support for adoptable storage devices. 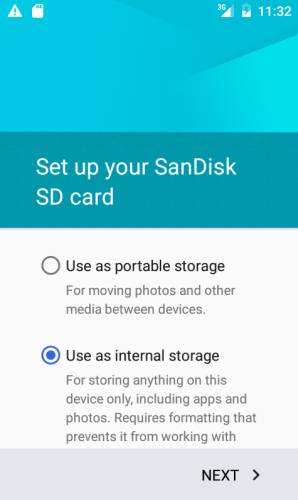 Speaking of external storage, this is what happens when you connect a USB flash drive to a Nexus 5. 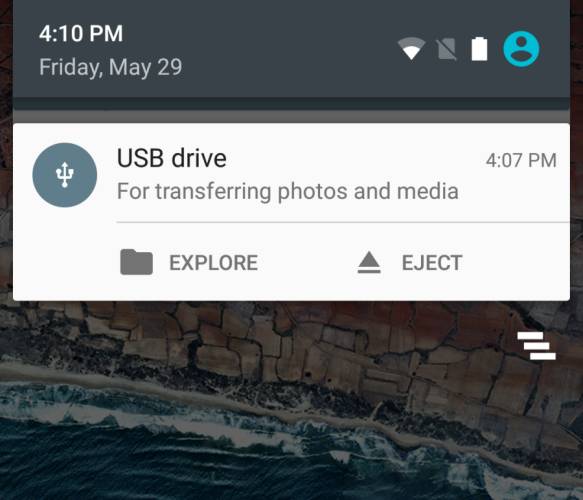 Choose the Explore option, and a file browser opens up, letting you sift through the contents of your flash drive. You can view content in list or grid modes, with small thumbnail icons for images and other content in list view or larger thumbnails in grid mode. 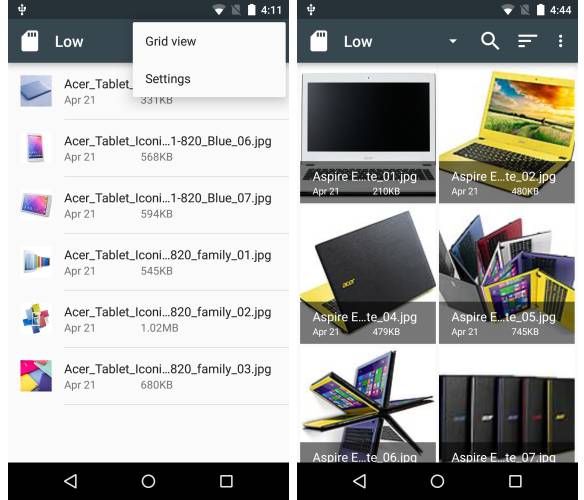 It’s interesting that the file browser seems to be pretty robust… but it only lets you explore the removable storage device. You’ll still need to install a third-party app if you want a file explorer for your device’s built-in storage.

The default launcher app for Android M also has a new app drawer. When you go to launch apps, you’ll see four of your most frequently used apps at the top of the screen, followed by an alphabetical list of apps… which you can scroll through. 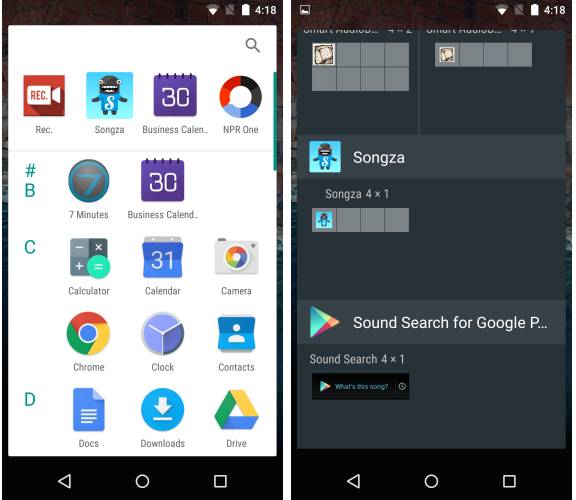 The widget menu is also now organized by app, and the home screen has been updated so that you can not only remove apps from home by dragging and dropping them to the top of the screen, you can also opt to uninstall apps from the same screen. 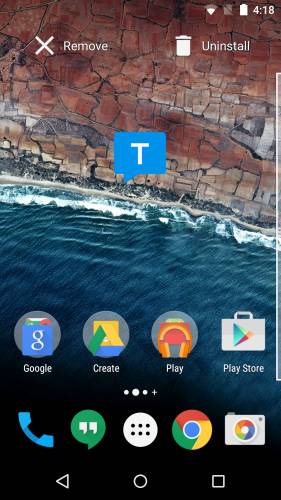 Update: This feature was available in early previews, but it has since been removed from Android 6.0. 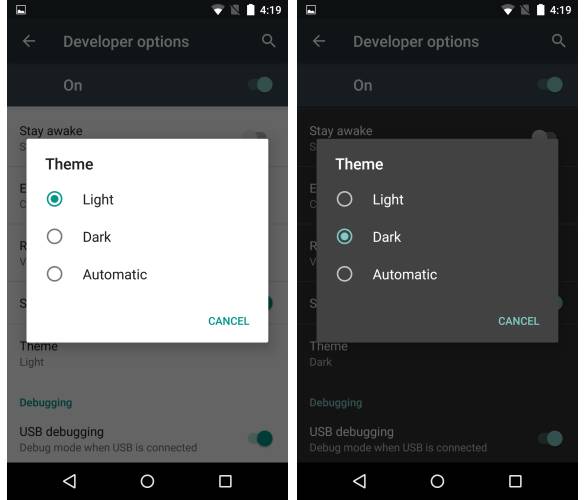 Don’t need all of the options in the Quick Settings panel? There’s a new tool available in the Settings menu called System UI tuner. It lets you remove tiles you don’t want to see and change the order of the tiles that you do want. 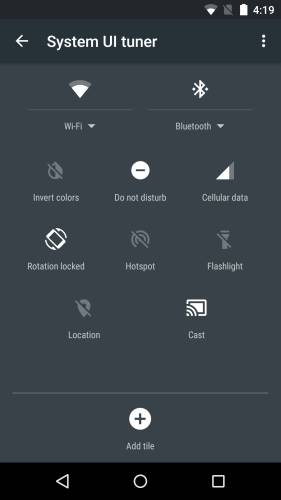 So if you never use airplane mode, but want the Hotspot icon to be at the top of the screen, you can customize your Quick Settings panel to meet your needs.

Want to turn off heads-up notifications for specific apps? There’s an option for that… although Google now calls the action “peeking.” 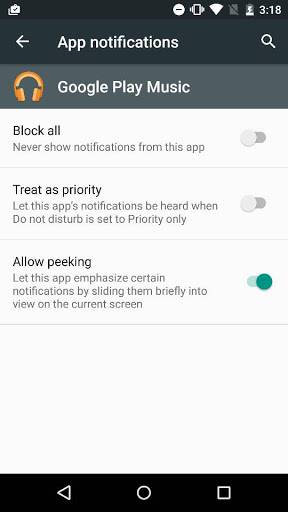 A more developer-friendly feature is support for bitmaps in notifications to create graphics on the fly for things like weather images.

Google is taking steps to reduce power consumption of Android devices. One big part of that is a new feature called Doze which puts your device into a low-power sleep state when it’s not in use.

Doze uses motion detection to sense when your phone is idle and puts it into a deeper sleep state than earlier versions of Android offered, while waking the system periodically to perform pending operations. 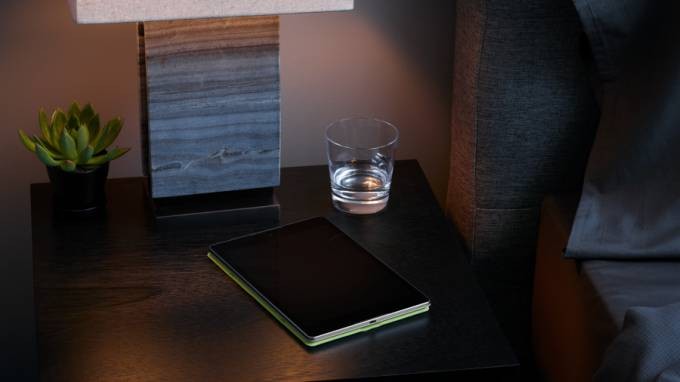 When Doze is active, wake locks are ignored, WiFi scans are disabled, sync jobs are not performed, and network access is disabled unless a high-priority Google Cloud Message. Some types of alarms are also disabled.

Google says all of this can double the idle run time of the Nexus 9 tablet.

There’s also a new feature called App Standby which disables network access for apps that haven’t been used in a while. 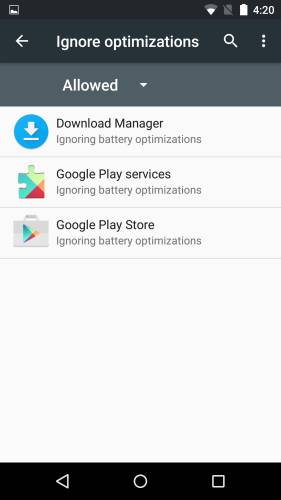 Want to make sure your device doesn’t shut down apps you need? There’s an Ignore optimizations setting that lets you tell Google which apps need to keep running, Doze and App Standby be damned.

Google Wallet is growing up and getting a complete overhaul. Meet Android Pay.

This is Google’s new mobile payment system which lets you tap your phone against an NFC-enabled checkout system in 700,000 stores around the country or pay for in-app purchases on your device. 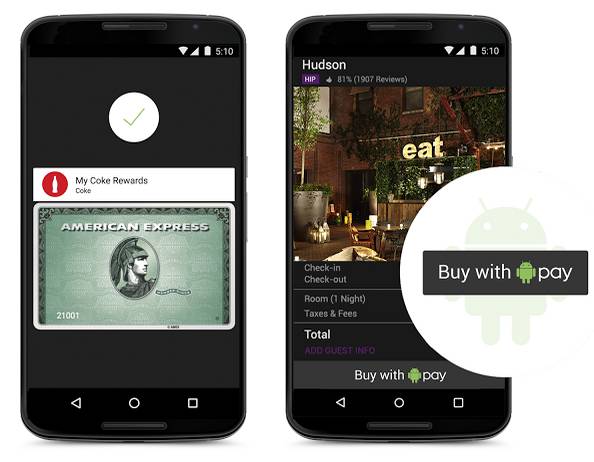 While some Android phones have already shipped with fingerprint sensors, they’ve relied on third-party authentication software. Now it’s being baked right into Android.

Google will allow users to unlock their devices or confirm purchases from the Google Play Store using a fingerprint scan. Developers can also use APIs to integrate fingerprint authentication into their apps. 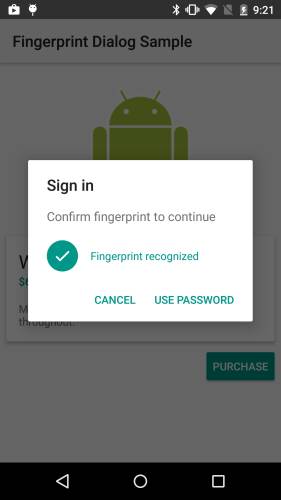 For instance you can sign into an account, make purchases, or perform other sensitive actions that require confirmation of your identity.

Android’s Share tool has long made it easy to share pictures, web pages, and other item. Just tap a button, choose the app you want to share your content with, and then figure out who you want to share it with and… actually now, that does sound kind of tedious. 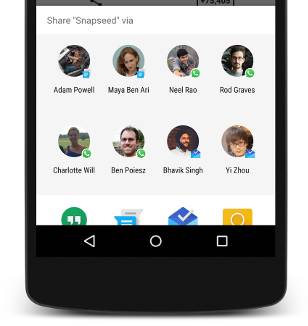 Want to share your phone’s mobile data connection with other devices over WiFi? Android has had a built-in hotspot feature for a while (although it doesn’t work with all phones from all carriers).

Starting with Android M, you’ll be able to choose whether to use a 2.4 GHz or a 5 GHz band, assuming you’ve got a device that supports both.

There’s improved support for a Bluetooth stylus, which lets you pair a stylus with your phone or tablet and detect not only pressure ant touch input, but also button presses.

This lets apps perform secondary actions when the button is pressed. 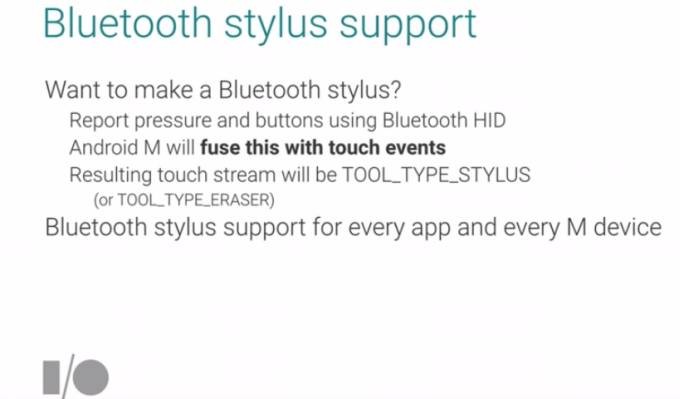 Google says this will allow any app to detect that you’re using a stylus, even on a device that doesn’t have an active digitizer.

Android M introduces support for the MIDI protocol for connecting audio hardware like keyboards or other controllers.

For folks that aren’t musicians, there’s a simpler audio improvement: volume controls which make it easier to adjust the volume of alarms, music, and notifications.

Now when you hold the volume button down for a few seconds, the volume level will slide down until it hits vibrate. Tap the slider volume button again, and it enables do not disturb mode (which you can also access from the Quick Settings panel). 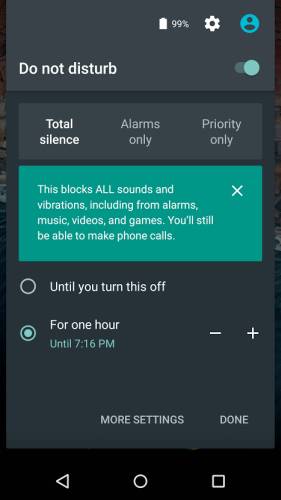 You can also now easily adjust volumes for notifications, alarms, and media using separate sliders. Just tap the expand icon from the volume pop-up to see three different volume levels which you can adjust.

When you connect a USB cable and tap the USB icon on your device, you now have several choices including charging only, transfer files (MTP), Transfer photos (PTP), and MIDI. 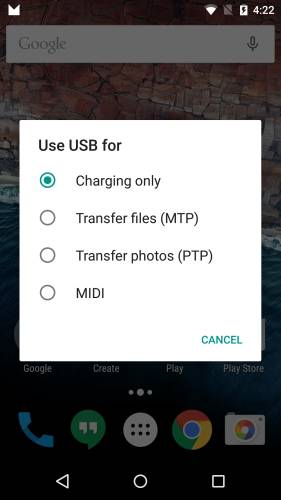 These let you decide which type of connection you’d like to make… but sadly it doesn’t look like Google remembers your last selection. I’ve had to choose MTP every time I want to transfer photos from my phone to my computer, because Android seems to default to charging only.

There’s now support for a floating toolbar with copy, cut, paste, and other actions when you copy text. Previously this would appear at the top of the screen instead of above the content you’d actually selected. 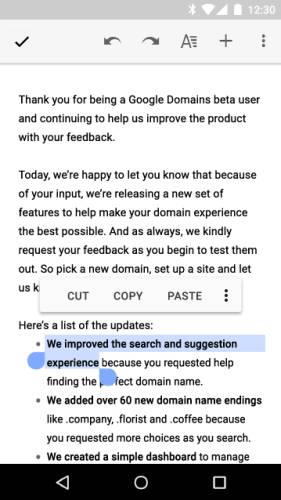 It’ll be up to developers to integrated the floating toolbar, so it might not be available for all apps.

The Android keyboard works well enough on smartphones and tablets with small screens. But what if you’re holding a larger device in two hands? Now there’s a split keyboard that lets you type with your thumbs while holding onto a larger device like a Google Nexus 9 in landscape mode. 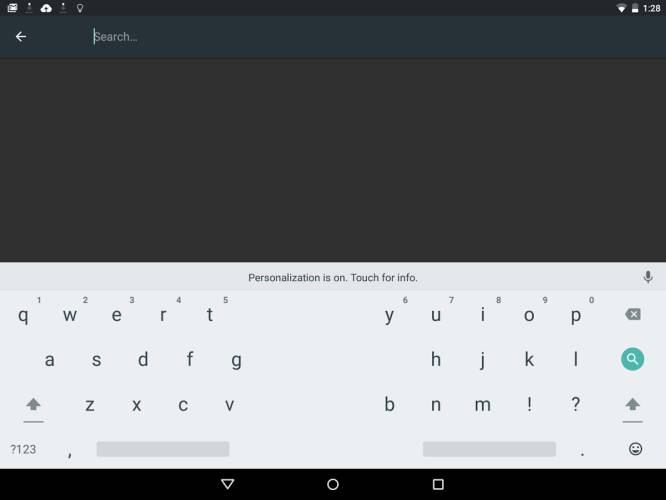 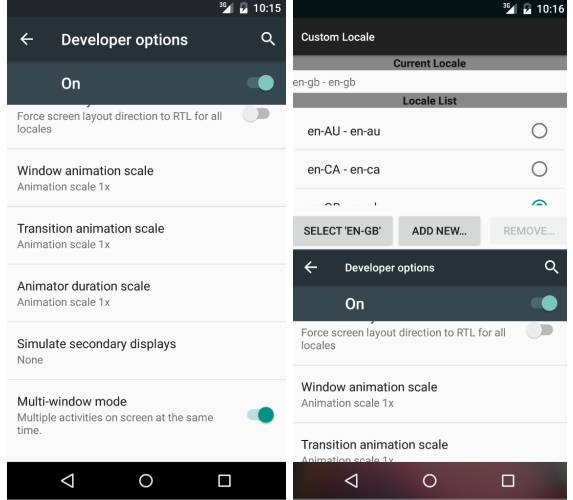 Multi-window mode is still experimental and it’s not clear if it’ll make it into the final version of Android M, or if this is just a preview of something Google is working on for a version of Android that’s even further off in the future.

You can learn more about how the feature works in our article on multi-window support in the Android M developer preview.

Google’s software for enterprise users lets you maintain two separate profiles on a device: one for personal use and another for work. Data isn’t shared between the two, and there are security features in place to help your boss feel comfortable with letting you wander around with sensitive data. 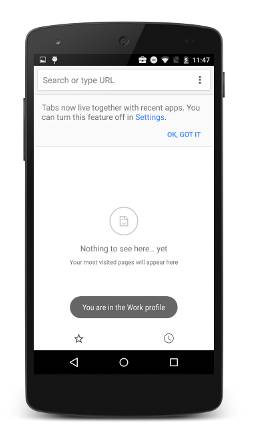 Android M allows device owners to disable or re-enable some features including the status bar, safe boot mode, and the keyguard, allows silent app installs and uninstalls by the device owner, and adds support for auto-acceptance of system updates, among other things.

Google is also updating Android TV with a few new features. The Android M version of the company’s OS for smart TV devices adds native support for external storage and A2DP Bluetooth streaming, so you can hook up a USB hard drive and pair your Bluetooth headphones with a Nexus Player or other Android TV device.