The next major version of Android won’t be released to the public until this fall, but the Android L Developer Preview launches June 26th, giving developers (and early adopters) time to get ready for the official launch.

The preview also gives us a pretty good idea of where Android is going. During the Google IO 2014 keynote the Android team showed off a new design language for Android’s apps and user interface and a few of the new features. All told there are thousands of changes on the way. Here are some highlights. 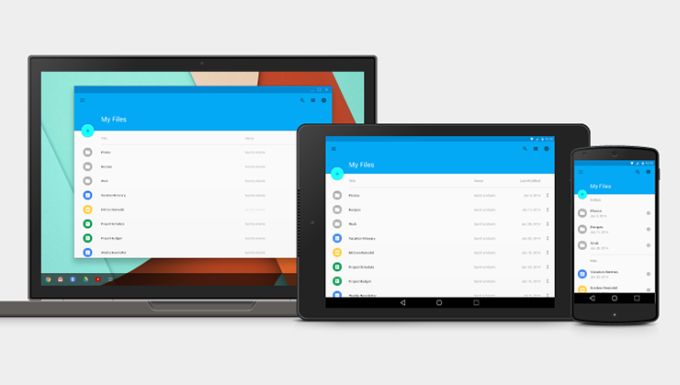 
The first thing you’ll probably notice is an entirely new design language called with an emphasis on simple colors and motion. Material design isn’t just about a new UI for phones and tablets — we’ll also see these design elements in Android for TV, smartwatches, and cars.

Google calls the design Material because it’s supposed to be reminiscent of real, tactile materials like paper and ink.

The UI involves lighting and shadow effects, ripple effects, and the sense that when you’re touching or moving elements on the screen they’re interacting with you. At the same time, the design is flat rather than skeumorphic — you won’t see any notebooks with fake bindings, for example. Instead there are a lot of bold colors and discrete edges.

Material Design affects the operating system as a whole, but you’ll really start to notice it in apps such as Gmail, the phone dialer, and the new Google Keyboard all of which have a simple new design.

Google has tweaked the layout of notifications and brought them to new places. 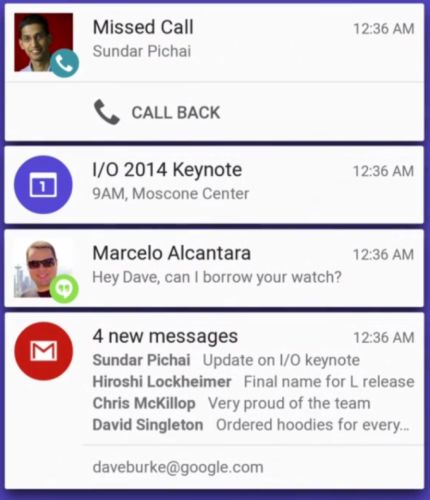 The notification pull-down tray now has a bright color scheme and new iconography to make it clear which apps or people are behind each notice.

Notifications will also be available on the lock screen for the first time, allowing you to see info at a glance without first unlocking your device. 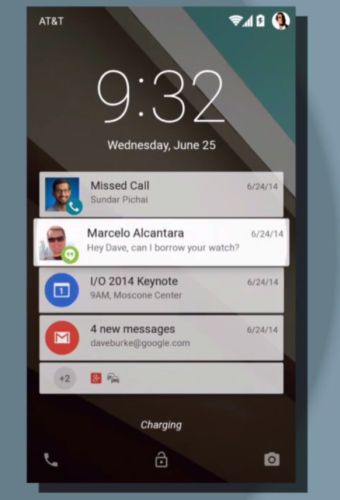 Don’t like the idea of people being able to see your alerts when they pick up your phone without permission? Don’t let them. There’s support for visibility controls — app developers can decide which apps have access to lock screen notifications, and I get the sense that users can decide as well.

There’s also support for heads-up notifications which display and let you respond to alerts in a floating window even when you’re playing a game or using another full-screen app.

Google Android L includes something Google’s calling Project Volta. It’s basically a new set of tools developers can use to help apps run more efficiently so that they don’t drain your battery.

Users will also be able to turn on a battery saver mode to extend run time. Google says a Nexus 5 user, for example, should be able to squeeze an extra 90 minutes of battery life under typical usage with Battery Saver mode enabled. 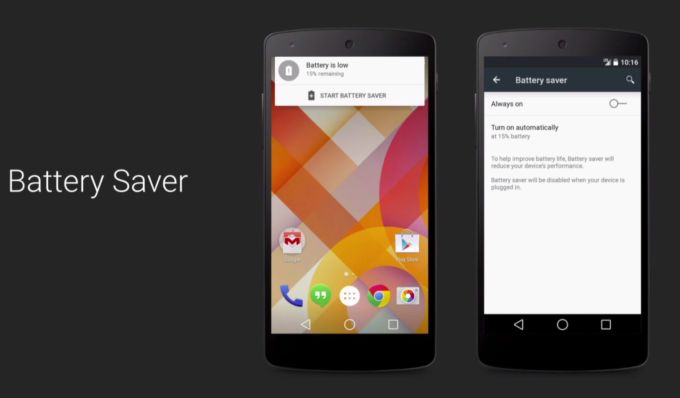 That includes a Battery Historian tool developers can use to monitor power consumption and a job scheduler API which lets developer set conditions that need to happen for a background task to run. For instance certain activities might only run when a phone is idle or when it’s charging.

The Quick Settings pull-down menu has been redesigned so that you can see notifications at the bottom of the screen without tapping a button to switch between settings and notifications views.


From the lock screen you can now swipe right to open the phone dialer or down to view notifications. You can also still unlock your device by swiping up or swipe to the left to enter the camera app. 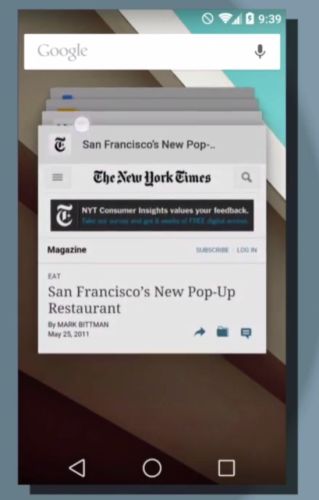 For example you can see recent web pages that were open as Chrome Tabs rather than just an icon for the CHrome web browser.

There’s a new camera API that allows third party apps to capture uncompressed YUV images at 8 megapixels at 30 frames per second… assuming Android is running on a device with a camera that supports those features.

Other improvements in the camera API include support for controlling ISO sensitivity, frame duration, and more.

Android L adds support for OpenGL ES 3.1 and includes a new set of tools called the Android Extension Pack which includes tesselation and geometry shaders and other features that Google says could bring desktop-class graphics to Android games.

The Dalvik just-in-time run time is dead. Starting with Android L Google is using a new runtime called ART, which stands for… Android Runtime. It uses ahead-of-time compilation which could speed up performance, and improve memory usage.

This is one of those under the hood changes you may not even notice… but it could speed up the performance of some apps and devices.

Don’t want to take any phone calls while you’re in a meeting or trying to sleep? Just fire up Do Not Disturb Mode and choose how long you’d like it to stay in effect.

You can get to the menu by sliding the volume all the way down on your phone to bring up Do Not Dustirb options, or you can access it from the Notifications area in Android’s Quick Settings pull-down menu. It’s also accessible in the Sound & Notifcations area of Android’s Settings menu.

The update includes support for Android wearables, allowing apps to sync data between a phone or tablet and a smartwatch for instance. It also includes a new version of Google Play Games with support for Saved Games and Quests, among other things.

Play Services 5.0 also includes improvements for subtitles in Google Cast, an app indexing API to make content from apps discoverable in Google searches, support for “Save to Wallet” functionality, and more.

This is all just the tip of the iceberg. Other major changes include Google’s push to bring Android to new devices including wearables, televisions, and automobiles.

3 replies on “What’s new in the Android L Developer Preview?”