Google Android 5.0 is ready to go. About 4 months after releasing a developer preview, Google has given the next version of Android a name and announced the first products that will ship with the software.

The Google Nexus 6, Nexus 9, and Nexus Player will all run Android 5.0 Lollipop when they hit the streets in November. An Android 5.0 SDK launches on October 17th. And in the coming weeks Google will roll out Android 5.0 software updates to some recent Nexus and Google Play Edition phones and tablets. 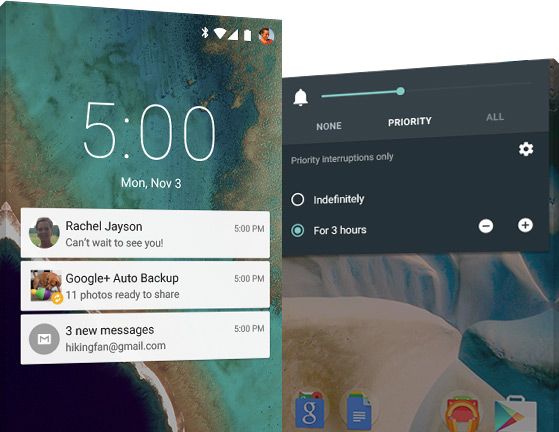 Update: You can find more details in our Nexus 9 review and Android 5.0 Lollipop hands-on article.

The most noticeable change is a new design language called Material Design. It’s easy to think the biggest difference is the new bright, bold color scheme. But Google calls the design “material” because it’s supposed to feel like actual materials on your screen.

Google defines this as realistic lighting and shadows, support for natural motions, and edge-to-edge imagery that takes over your screen. 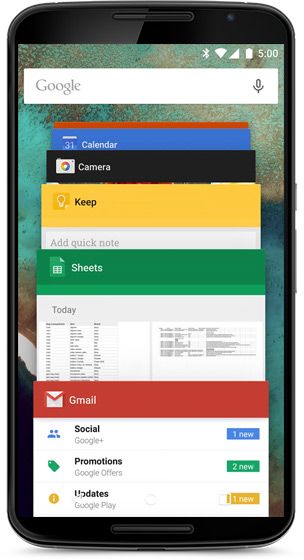 In other words, sliding form one screen to another should feel sort of like sliding one piece of paper over another… as if they were actual materials and not just pixels on a screen.

The recents menu has also been redesigned to work like a stack of papers rather than a series of side-by-side thumbnail images.

You can now respond to messages directly from your lock screen. But if you don’t want sensitive data showing up on your lockscreen, you can hide it.

There’s also an option to enable priority mode to that the only notifications that will show up are those that come from certain people. Want to make sure you’re only woken up at night if it’s an emergency? Enable priority mode during set times.

You can also turn off notifications from certain apps altogether. And Android will attempt to automatically rank notifications depending on who they come from and what mode of communication they’re using so that your most important notices are on top.

Android 5.0 uses the ART Android runtime instead of Dalvik. Google says it offers up to 4 times the performance while running the same app, enables smoother user interface elements, and offers improved multitasking by making background apps and services more compact.

ART has been available for developers to test for a while and many people have reported that real-world performance hasn’t quite lived up to the promises Google’s made… but Android 5.0 is the first version of Google’s operating system which ships with ART enabled by default. That could make a difference.

Lollipop is also the first version of Android with built-in support for 64-bit processors. That includes ARM, x86, and MIPS-based processors, not just the NVIDIA Tegra K1 chip that powers the Nexus 9 tablet.

Some of Google’s core Android apps including Chrome, Gmail, Calendar, and Play Music are already 64-bit ready. Any Android apps developed using Java should automatically support 64-bit architecture as well. Developers of those apps won’t need to make any changes.

Android 5.0 lets you pick up on one device where you left off on another. If you’re listening to a song, or looking at a photo on your phone, you can fire up the same content on your tablet. 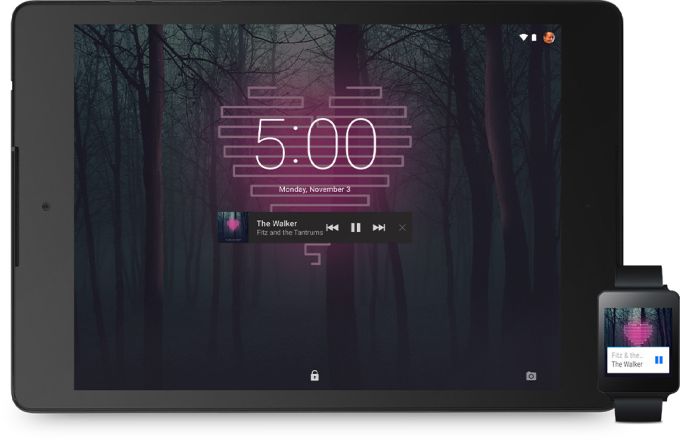 Recent searches are also available on all of your devices.

Android already allowed tablet users to set up multiple accounts. Now you can do that with a phone too.

This lets you create multiple profiles on a single device so you can lend your phone to a spouse, kid, or friend and not worry that they’ll have access to all of your apps.

There’s also a guest user mode that doesn’t require you to set up a specific profile.

You can also get to the Quick Settings by swiping from the top of the screen twice.

There’s a new battery saver feature which turns off some power-hungry features to help you get up to 90 more minutes of battery life on some devices.

When you’re charging a device you should also now see an estimate for how much more time it’ll take to fully charge your device.

Google says there’s better support for network handoffs, allowing you to do things like switch from WiFi to a cellular network without dropping a video or VoIP call.

There’s also now support for a low-power scan for nearby Bluetooth Low Energy devices such as smartwatches.

As promised, Google has reduced audio latency which should make Android 5.0 a better fit for music and audio creation and editing apps than earlier versions. Apps can also now mix up to 8 channels of audio, and Android 5.0 includes USB audio support for USB microphones and other peripherals.

A feature that was originally exclusive to the Motorola Moto X is now baked into Android: You can wake any phone or tablet with a supported digital signal processor just by saying “OK Google.”

This lets you ask Google a question, set an alarm, send a message, or perform other tasks without touching your phone.

Devices with supported hardware will also wake as soon as you pick them up or tap the screen twice. I guess those aren’t Motorola or LG-specific features anymore.

The operating system that runs on the Google Nexus Player and other Android TV boxes is basically the same as the software that runs on phones and tablets. It’s just got a TV-specific user interface.

This lets you navigate using a remote control and voice commands, allows you to play games with a gamepad (which you can also do by pairing a game controller with a phone or tablet), and cast content from your phone or tablet to your TV the same way you would with a Google Chromecast.

Want to set up your new Android device so that everything is just like your old one? If both devices have NFC, all you need to do is tape your old Android phone or table to your new one and use the Tap & go instant set up option.

Encryption is enabled automatically on new devices, and SELinux is enforced for all apps.

You can also use a new Android Smart Lock feature to pair your phone with a wearable, a car, or other supported device so it can be unlocked when the other device is near.

Google is also adding support for what some folks like to call a “kill switch.” If enabled, the new factory reset protection feature prevents you from wiping and resetting a phone unless you enter a password.

While that kind of sounds like the opposite of kill switch, the idea is to make it tougher for someone to steal a phone, wipe it, and sell (or use it).

Google has also added support for print preview and selecting a range of pages you want to send to a printer. The company says it’s done a better job of ranking which options you might want to use in the Share menu.