Earlier this month Asus unveiled a tiny computer called the Asus VivoStick. It’s a small stick that you can plug into the HDMI port of a monitor or TV, and unlock some devices in this category, the VivoStick has two full-sized USB ports and a headset jack as well as a microUSB port.

The $129 mini-computer is also expected to feature an Intel Atom Cherry Trail processor.

But you may not have to wait for the VivoStick to hit the streets if you want to pick up a PC-on-a-stick with the Asus name on it. 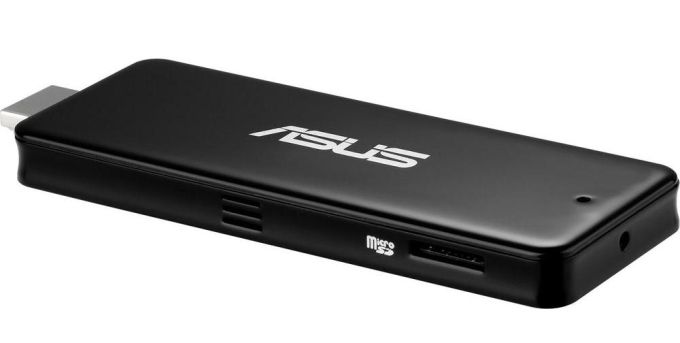 This summer the company quietly started selling a PC stick based on the Intel Compute Stick platform. It’s called the Asus QM1-B002 and it’s available in China and parts of Europe for around $140 to $160.

I’m not sure I’d recommend buying one though… while the upcoming VivoStick has a distinctive design and distinctive specs, the Asus QM1 looks like pretty much all the other Intel Compute Stick clones on the market.

It features an Intel Atom Z3735F Bay Trail processor, 2GB of RAM, 32GB of storage, an HDMI connector, a micro USB port, a USB 2.0 port, and a microSD card slot.

In other words, just about the only thing that makes the Asus QM1 different from a dozen similar products released over the past year is the Asus logo on the case. Still, the little PC is noteworthy because it’s available, while the Asus VivoStick isn’t yet.

Asus is also expected to launch a Chrome OS-powered PC stick called the Chromebit this year.

2 replies on “What VivoStick? Asus already has a PC-on-a-stick (for select markets)”