Fairphone is a small company with a big idea: produce smartphones using ethically-sourced materials and invest some of the profits from phone sales in programs to help the workers that build the phones.

But it’s not cheap to do that: the company’s second smartphone is expected to sell for 525 Euros (about $600 US). That’s a flagship-style price tag for a phone with 2014-era flagship-style specs.

Wondering where the money goes? Fairphone has provided a cost breakdown for the Fairphone 2. 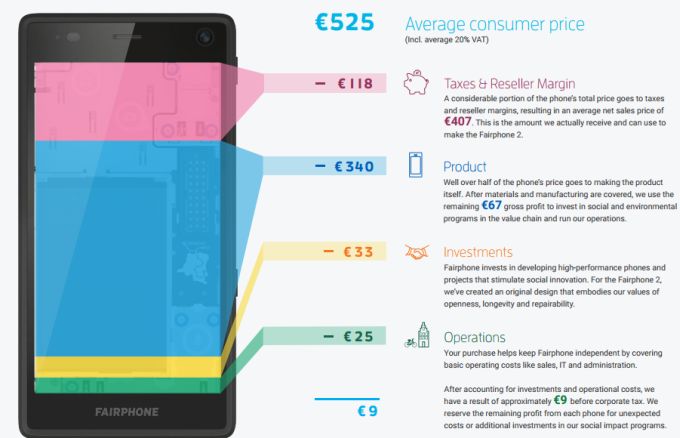 About 60 percent of the cost actually goes to the materials and manufacturing of the phone itself. The next-biggest expense is taxes and reseller margins… although that figure will vary from country to country. Fairphone estimates a Value Added Tax rate of 20 percent for sales in Europe, but that’s not the exact rate for all countries in the EU, and the company plans to expand sales beyond Europe, which means some customers may pay lower taxes and no VAT.

A much smaller amount of money goes to paying for operational costs of the Fairphone company and investments in technology and social programs including initiatives to obtain ethically-sourced materials from conflict-free regions.

It’s worth noting that these numbers are based on an estimated 140,000 phones sold. Costs could go up if fewer phones are ordered, or down if more are ordered… but that number is pretty small compared with the number of iPhones, Samsung Galaxy phones, or other big-name phones that are produced each year. That means a company like Fairphone doesn’t have the same economy of scale as a bigger company: it’s generally cheaper (on a per-phone basis) to make a million devices than a thousand.

Of course, knowing why the Fairphone is priced the way it is might not necessarily make the price more palatable: $600 is still a lot of money to pay in 2015 for a phone with a Qualcomm Snapdragon 801 processor, 2GB of RAM, 32GB of storage, an 8MP rear camera, and a 2420 mAh battery.

The Fairphone 2 also has a modular design, with options to replace or possibly even upgrade components including the camera, screen, microphone, and battery.