Another day, another development in the hottest smartphone trend of 2018: notches.

Chinese phone maker Xiaomi is expected to reveal the Mi Mix 2S smartphone later this month, but a leaked video allegedly gives us a sneak peek at the design.

I have no idea if the video is the real deal, but it is intriguing because it shows a novel solution to the where-do-you-put-the-camera-on-slim-bezeled-phones dilemma: in the upper right corner. 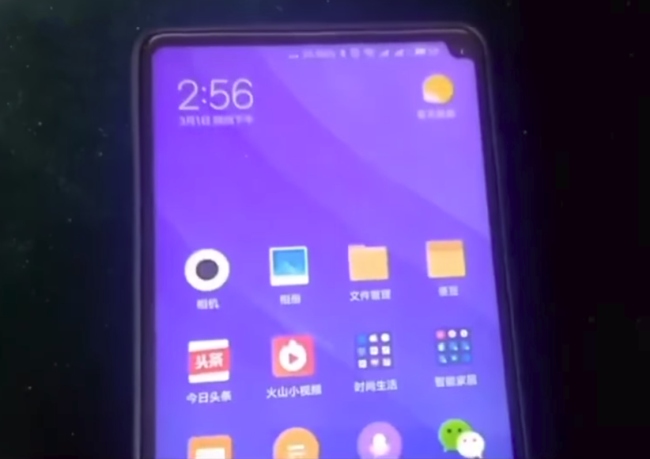 Xiaomi was arguably one of the companies that kicked of the slim-bezel craze when the company introduced the original Mi Mix in 2016 (even though Sharp actually beat Xiaomi to market by 2 years).

The Mi Mix featured a ceramic body and slim top and side bezels. The camera was below the screen instead of above it.

These days most companies are taking their design cues from Apple and Essential and wrapping the display around a cut-out for the camera. Those camera notches tend to be in the center of the phone, but the Mi Mix 2S video depicts the first phone I’ve seen with a corner notch.

I don’t know about you, but there’s something a little less objectionable about placing the camera in the corner, where it doesn’t seem to be jutting into the center of the screen in the same way. Or maybe it’s just because the notch seems to be so small you could almost forget it was there.

Of course, another way to forget the notch is not to have one at all. That’s the approach Vivo seems to be taking with its Apex smartphone concept that has a retractable camera that hides inside the phone’s body when it’s not in use and pops out when you need it.

Vivo unveiled the Apex concept phone at Mobile World Congress in February before giving the device a proper launch in its home country of China this week. At least one news site reports that Vivo already plans to take the Apex phone from concept to reality, with mass production scheduled to start later this year.

via GSM Arena and Slashleaks

15 replies on “What if phones had a tiny camera notch in the corner?”